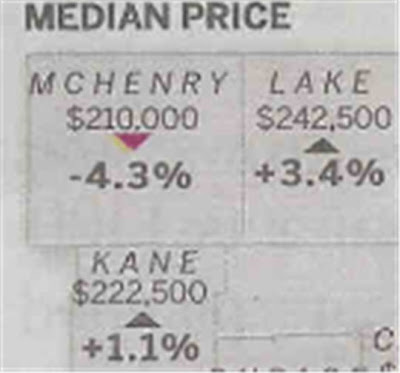 Because of a compromise I made in the 1970’s in Springfield, real estate assessments are not based on current market value.

Or even last year’s market value.

Representatives from the Illinois Agriculture Association in the first floor committee meeting room next to the main stairway argued that using just one year would be unfair to farmers who sold their land to a developer. A recreational development in Jo Daviess County was the example, I think.

Against my better judgment, I agreed.

The farm lobby got exempted from the market value standard, getting legislation enacted that valued agriculture property according to productivity.

That means, of course, that farm land is assessed much, much lower than homes and businesses. It’s the reason that developers grow corn on their empty land.

Lower, much lower taxes than if based on what the developer paid for the land.

But, back to the topic at hand. 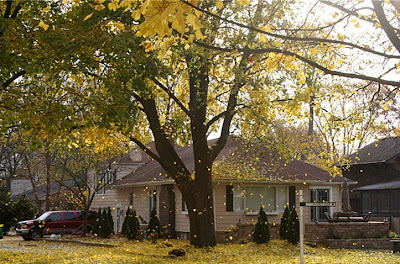 The latest month’s information shows the median price dropped 4.3% in McHenry County compared to a year ago.

Because of the three-year average definition used in assessing property, that does not mean your assessment will be cut an average of 4.3%.

By next year’s tax bills (not next month’s, but next year’s) you might think that assessments should fall.

I wouldn’t be expecting a cut in assessed value next year.

BUT, even if the average were lower, that would not mean your tax bill would decrease anymore than increasing assessments mean it will rise.

I know that is counterintuitive, but the property tax cap, which has been in effect since the early 1990’s, has resulted in tax districts being forced to lower their tax rates.

The tax cap legislation limits the growth of a tax district’s revenues to the increase in the cost of living (CPI), plus taxes on new construction.

With assessments increasing more than the Consumer Price Index for a long, long time, that meant tax rates had to decrease.

The result is that probably every tax district with a tax rate limit now is below that limit.

So, with a lower assessment tax base, the districts will just raise their tax rates enough to be able to capture whatever the increase the CPI shows.

Added to that will be whatever tax increment financing (TIF) districts pull out of the tax base. Same reasoning as to what will happen to the tax rates.