Attorney Lou Bianchi sued the McHenry County College Board for kicking four citizens, including from out of its building while the trustees were meeting in top secret, hush, hush, about what shall we do about leasing land to or from, I assume, a radio station.

President Walt Packard was so desperate to keep any information about what John Maguire was proposing that he rushed to cover the window through which I took the second, more revealing slide (the one below with his head blocking part of the slide) with the American flag. That’s his head behind the American flag above, too. 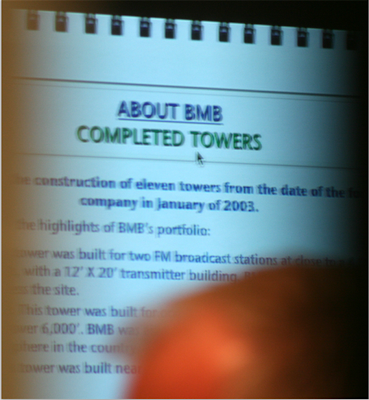 Although the meeting went on until after midnight and several other top secret, 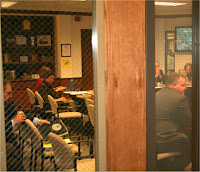 hush, hush meetings have considered John Maguire’s radio tower proposal, all that has leaked out has been two photographs seen above taken through the windows of the McHenry County College board room.

But, another source provided this information

about what Maguire wants. If this is correct, wouldn’t you think the public ought to know about it?

But, there’s no paper trail at McHenry County College, except what Trustee Scott Summers took home. And, the college said that was top secret, hush, hush, as well…even after Summers had drawn all those black lines through it.

After the big cover-up, I got this warning letter from Packard.

Then, I found this article about getting permission to put towers on land in Will County. Don’t know if it is related, but I believe the radio station next to MCC’s campus is owned by the same corporation. 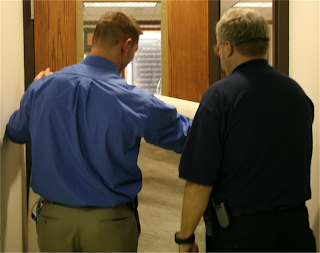 I took the photos of the broadcast tower slides and, not coincidentally, in my opinion, the night we four were kicked out, now there is a more efficient method.

Newly-installed Venetian blinds prevent us prying taxpayers from seeing inside the board room named after former board members Herb Lutter and Bill Ryan. (Somehow, I don’t think the two, both of whom I knew fairly well, would have approved of all the secrecy.) 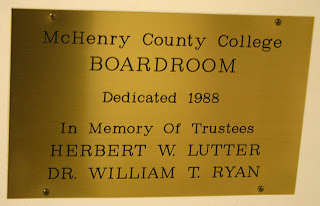 Since one can no longer see the top secret, hush, hush, meetings, all one has to look at now that the college secrecy advocates have installed Venetian blinds to, 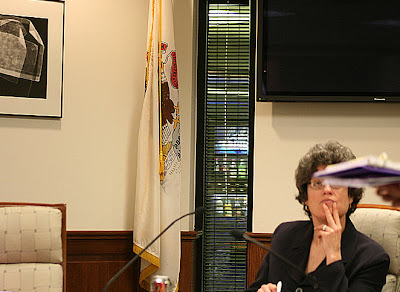 well, keep prying eyes and cameras from seeing what goes on in a top secret, hush, hush, college board meeting.

I asked some friends who might be attending last Thursday’s meeting to let me know what happened. Here’s one response from a friend of McHenry County Blog:

You missed a lot of interesting information at the MCC Trustees meeting(s) tonight. Here are some highlights: 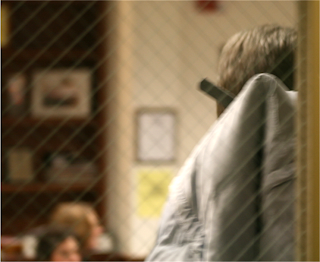 In response to a citizen question about why Friends of MCC Foundation Director Joe Like is included in closed sessions, when he is employed by the Foundation itself, Dr. Packard stated that Mr. Like is a paid employee of the college and a member of the President’s cabinet.

The decision to buy the $2600 Apple notebook computers instead of the $8-900 PC’s was “curriculum driven.”

When the slate of new officers was presented it turned out that Donna Kurtz was not contacted and did not have any input into the process, nor could she get Mary Miller who was the nominating chair (and slated for Vice President) to commit when asked to affirm that the new leadership team would be open minded and willing to consider the ideas and views of ALL the Trustees. 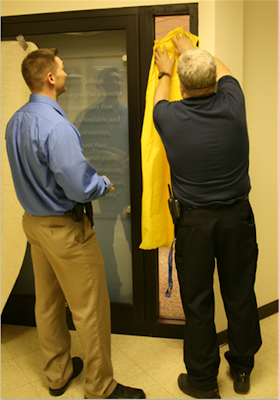 Ms. Miller just deflected, by asserting that the whole board was already pretty open and had made some good progress toward being more so. Mr. Lowe (slated President) deflected by keeping his head down.

When she was distracted from an agenda item by a side discussion with Carol Larson, George Lowe impatiently reprimanded Donna Kurtz that she should pay attention sometimes.

When newly seated (literally five minutes before) Student Trustee Tom Kendzie voted “abstain” from a roll call vote on reappointment of the Board Attorney Sandra Kerrick, he was told he couldn’t do that. He voted affirmative on that and the rest of the agenda. (His vote either way did not change the outcome.)

George Lowe prefaced his comments on the same agenda item with comments that it was too late to make any desired changes at this meeting; that they should work on that and get it ready for next year if they wanted to change attorneys.

Oh, and they watered down Donna Kurtz’s idea to have OM training for the board, into a request for the State’s Attorney to schedule one of their trainings on an MCC Trustees “off-night” so those who wanted to attend could attend and those who did not want to… well you get the drift.

But nothing quite says it all like the irony of going into closed session to discuss the State’s Attorney’s filing an Open Meetings violation against them.

On a more positive note, they did a nice job of presenting Katie Claypool with a plaque and her parents were there to celebrate with her. They swore in the new student trustee and senate officers. And they finished all three agenda’s by 9 p.m. Not a word about a cell tower.

I forgot to tell you that there were no barricades as Packard had mentioned in the Herald article that there would be. We were very disappointed.

The new student trustee needs to know that he can abstain on anything he wants to, regardless of what anyone says, unless there is something in the board rules specifically saying abstentions are not allowed. It won’t take long for him to see that anti-bullying rules do not apply to board meetings.

Except for the two pictures of the new Venetian blinds, one open from the inside next to Trustee Donna Kurtz and one closed from the outside, the other photos of efforts to cover up the windows occurred at the meeting before the four of us were illegally kicked out of the MCC building.