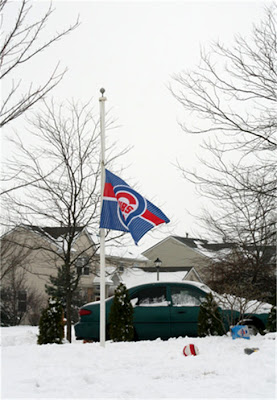 I’m not much of a sports fan.

Haven’t been since the Dodgers moved from Brooklyn, although I did win some money betting from irrational White Sox fans betting on the LA version when they faced off in the World Series right while in my final two years of high school after moving from Middletown, New York, to Crystal Lake.

But, still, this Cubs flag deserves more publicity than it gets from being on a busy corner in a Lake in the Hills subdivision.

Half mast and all.

As you can see I took it during winter.

Or was it late spring?

I wonder if it is still at half mast.