category is legislative language proposed by

Two who might run for governor–Republicans Bill Brady and Dan Rutherford–voted against the bill in committee, as did the GOP’s Brad Burzynski . Dan Cronin, also a Republican, voted present.

The supporters want to allow auto mechanics and body guys, sign hangers, auto attendants and, would you believe, messengers to retire at full pension benefits after 25 years. 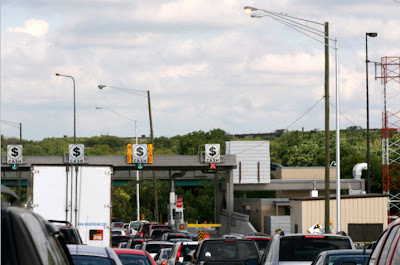 Lots of other tollway folks, too:

Make no mistake about these employees being your bed rock patronage types. They work not only for the tollway, but for Agriculture, Transportation and Central Management Services.

This is one audacious bill.

Jim Tobin’s National Taxpayers United of Illinois flagged this atrocity for me. NTU’s press release is the top one on its new web site.

Ultimate credit goes to Kristen McQueary, however, I was told. These abuses of the taxpaying public were featured in her Sunday Daily Southtown column.

Can anyone in Springfield spell 401(k)?

= = = = =
In the photo of the O’Hare toll plaza at rush hour, note that one of the cash booths is unmanned. Probably out lobbying a state senator for a pension increase.