One of the disadvantages of the cut back in advertising revenue at the Northwest Herald is that stories that are beyond the McHenry County court system are difficult, if not impossible, to cover.

An example is anything involving Island Lake’s village government. Because the village hall is located in Lake County, court action takes place in Waukegan.

“This is nothing but small-town politics and personal vendettas against my client,” said Alfred Stavros, Kachka’s Wheeling-based attorney.

Two village officials didn’t like his tee shirt, which said,

They also objected to his pointing his finger at the board, alleging Kachka used the hand gesture kids use all the time in playground gun fights.

Weeks after the meeting, they had him arrested.

The comments under the article are favorable to Kachka.

“The hand gesture that was made by him wasn’t out of the ordinary. I grew up with him and for as long as I can remember he has always pointed like that. Whether he was just talking or yelling if he had to point that is how he did it. Greg is a good person and he has always been.”

Another says in part,

“I was born in Europe and grew up during communism. 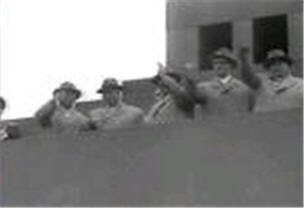 It is my impression that Democrats control the Island Lake village board, although it is officially non-partisan. One of the ruling faction is Richard Darling, the Democratic Party candidate for state representative against Barrington Hills Republican Mark Beaubien in the 52nd district. Garling’s name has not been mentioned as one who complained to the police department.