If McHenry County College is any indication, the State of Illinois has community colleges on the “slow pay” list.

In a report from MCC President Walt Packard, he notes, “State revenue is currently 76% of budget compared to 99% of budget last year.”

He points out that payments were almost $580,000 short of what the college had received through May of last year, “due to a timely delay in the distribution of the fourth quarterly payment from the State.”

Legal fees are up. Earlier Legal fees are co-mingled with other contractual services, which are over $668,000 higher than last year.

The college has refused to reveal how much was spent on lawyers’ (not) replying to Freedom of Information requests.

Capital expenses are up over $293,000. Want to bet that a lot were for the baseball stadium? 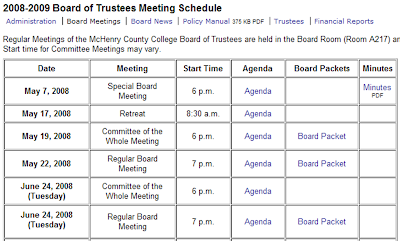 The board meets tonight at six. Note that the board packet was not posted at 4:30 PM on Monday, 25 and one-half hours before the Committee of the Whole meeting was scheduled to begin.