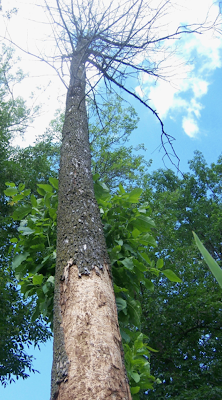 Observant reader Stan Gladbach, who lives on the Kane-McHenry County line east of the Fox River, has found what appear to be emerald ash borer-infected trees on his property.

He lives Souwanas Trail and has 8 or 9 big ash trees in his yard.

“About a week prior,” he continued, “I spoke with Paul from the Illinois Department of Agriculture about this and how they got through customs. Probably in wood pallet/skids.”

A man and a woman came out from the USDA and here is what they left (click to enlarge any image): 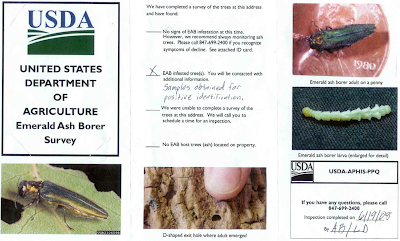 “My wife told me they were about 98% positive that it was the emerald ash borer,” Gladbach told me. 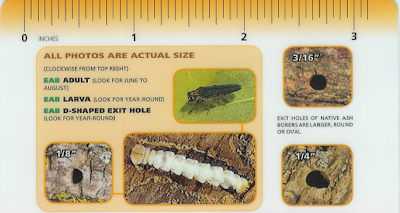 Official confirmation has not yet been received, but take a look at the above information card that was left at the Gladbach household. 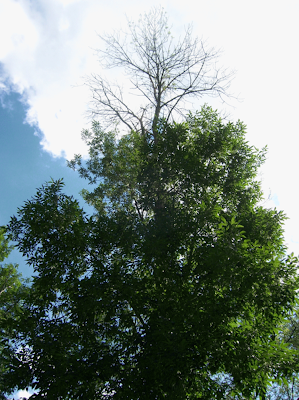 Yesterday, the Village of Algonquin sent out a cherry picker truck to take a look.

Julie Heminghous, who works for the state ag department in its emerald ash borer outreach project, said she was driving to Algonquin for a Friday morning meeting with its public works department.

Aaron Booton, a USDA employee with the Emerald Ash Borer Project (presumably the “AB” above), referred me to Jeff Coath, who did not return two phone calls.

But, there must be some reason that the Village of Algonquin’s Public Works Department had a cherry picker truck at Gladbach’s home Thursday morning.

One man picked up a dead bug and put it in a glass jar labeled “EAB.”

I asked Village Administer Bill Ganek if Algonquin had received official notice from either the Illinois or US Ag Department of the emerald ash borer’s presence in Algonquin. 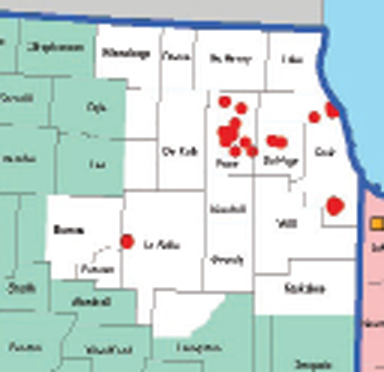 “We have not received verification of that.”

There must be some important reason that.

Guess we’ll have to wait for official confirmation that the emerald ash borer has penetrated McHenry County for a bit longer.

The map shows confirmed sightings of the emerald ash borer as of May 1, 2008. Sounds as if a more northernly red dot will be on the next version of the map.