Well, a state representative has finally summoned up the courage to say that Democratic Party Governor Rod Blagojevich should be impeached.

Was it a Republican?

His release follows. (I’ve added some paragraphs to make it easier to read on a screen.)

For decades, Illinois governors have been making hard choices when it comes to the state budget. The difference between our current governor and his predecessors is his attitude toward the process. This is all a game to Blagojevich.

He refuses to do his job and has now opened the door for impeachment.

Today, the Governor called for a July 9th special session for the General Assembly to return to Springfield to vote for initiatives that have already failed in the Legislature.

He made no changes to his proposals which failed so miserably last year but now expects the General Assembly to come back for another overtime session, where a much larger three-fifth’s majority is required, to vote on the same exact measures.

The Governor’s proposal to sell or lease the Illinois lottery failed by a whopping 7 to 97 vote in the Illinois House last year. The bill failed because it is not sound public policy to lease a $30 billion revenue generating asset for a one-time $7 billion dollar payout.

We must question the Governor’s motives for pushing the lottery leasing scheme so adamantly.

He continues to advocate for the privatization of the state lottery but refuses to sign pay-to-play legislation that would bar his cronies from enriching themselves from the sale or lease of state assets.

Blagojevich also continues to pressure legislators to pass a capital bill but has made no effort to make any serious proposal.

The Governor changed his estimate for the cost of a capital bill from $27 billion to $34 billion in the span of one week.

He refuses to give a line-itemed account of what the $34 billion would be spent on. Essentially, the Governor is asking the state to write him a $34 billion blank check.

With his long history of using state money to line the pockets of his supporters, can we really trust Blagojevich to administer a capital program without any accountability? 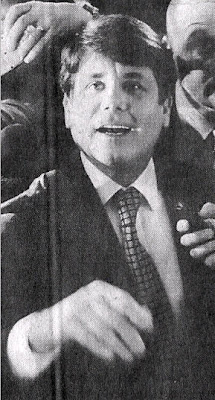 Instead of working on a compromise that will create real solutions for Illinois citizens, the Governor is instead trying to scare Illinois families and state workers. He has repeatedly threatened shut downs and halted some important projects that provide thousands of Illinoisans with jobs. The Governor is using front-line workers who provide vital services throughout the state as a human shield to guard him from compromise.

The projected budget shortfall for this year is only about 2.5% of the total budget.

Governors before him have made tough choices when it came to the budget. This Governor is squandering a perfect opportunity to cut wasteful spending.

During these hard economic times, the Governor has threatened to put at risk Illinois front-line workers, the disabled, our schools and social service providers.

The Governor makes so many threats because he cannot lead. Blagojevich is incapable of doing his job.

These special sessions are a game to the Governor.

I will ask Speaker Madigan today to create a committee to investigate whether there is enough evidence to proceed with articles of impeachment against Governor Blagojevich.

Here’s part of what I wrote:

“(Tony) Rezko, carrying the check, ushered the defendant into a conference room where he met with Rezko and Public Official A.

Don’t tell me that Speaker Mike Madigan doesn’t have access to skillful lawyers.

There is no reason to futz around with recall when state representatives can put some of these Rod Blagojevich sleaze bags under oath and replace the “Official A” of the plea agreement with the governor’s name.

And Franks gets more publicity in preparation for run for statewide office.