With all the stir created by McHenry County Democrats about not being allowed to campaign in the Algonquin Founders Day Parade this weekend, I thought maybe those planning to attend might like to see what they might be missing.

First, let’s look at the front of the Democrats’ contingent. 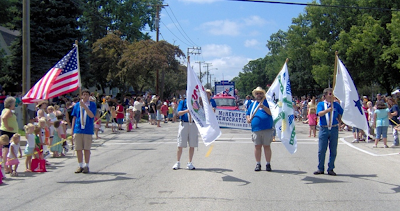 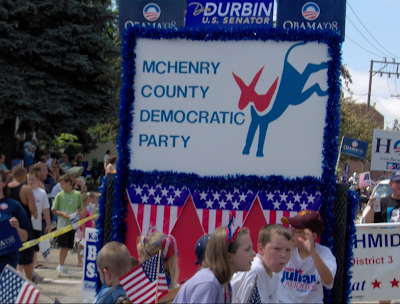 Kids can be seen on the Democratic Party float under a kicking donkey. I imagine the symbolism might have something to do with more people have taken Democratic Party primary ballots than voting on the GOP ticket this spring. 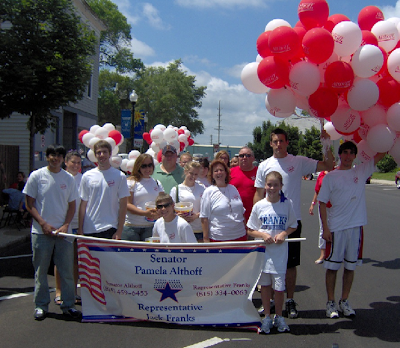 From the tee shirt on the girl to the right carrying the banner, which I looked at first, this looks like State Rep. Jack Franks’ entry.

Looking closer, I see it is a joint marching unit for Franks and Republican Pam Althoff. (No wonder Republicans didn’t come up with an opponent for Franks this year.)

I can’t tell you whether this unit marched with the Republicans, Democrats or far from both contingents. This appears to be a continuation of the cross- promotion that someone sighted a year ago at the McHenry County Fair, where the two shared a tent. Althoff does describe herself as “a social liberal.” She also wants to be known as “a fiscal conservative.”

In any event, it would seem to be allowed in the Algonquin parade, because office numbers on listed. In fact, McHenry County Board member Tina Hill, who is State Rep. Mike Tryon’s administrative assistance is standing behind the banner. I can’t remember if she works for Althoff, too. 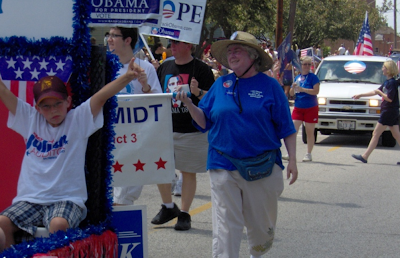 Democratic Party Central Committee Chair Kathy Bergan Schmidt, one of the folks from both parties who urged me to run for Republican precinct committeeman again, can be seen promoting her District 3 McHenry County Board candidacy. She wouldn’t meet the Founders Day Parade rule requirements, but, because she heads the local party, she’ll undoubtedly be on Route 62 Saturday. 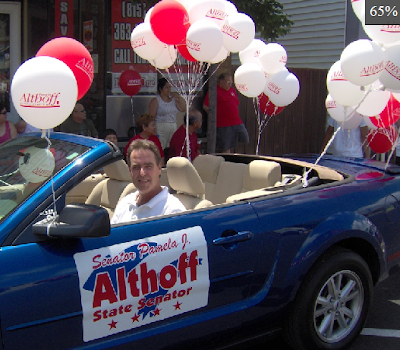 State Rep. Mike Tryon drove a red (no, a commenter writes; it’s blue) convertible with Althoff’s name and incumbent office on the door. Tryon is the chairman of the McHenry County Republican Central Committee.