Yesterday, I emphasized Democrats in the McHenry Fiesta Days Parade last weekend. What I am trying to do in looking at the entries allowed by McHenry parade organizers is to see which ones would make the cut in Algonquin’s Founders Day Parade and which would not.

Today we take a look at the Republican contingent, which, from the photos, appears to have been a lot larger than the one fielded by the Democrats. Of course, that may be a misperception, because because Republican parade walker recruiter John O’Neill shared his photos with me. 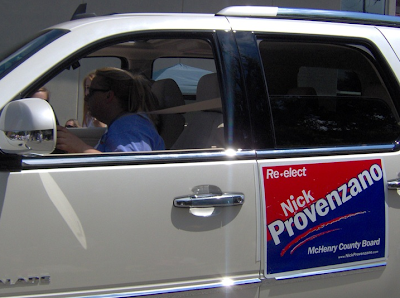 District 3 McHenry County Board member Nick Provenzano’s sign wouldn’t make the cut in Algonquin’s parade. It says, “Re-elect.” He’s have to tape over the “Re-elect” or cut it off to use it there. But, since he doesn’t represent any part of the Algonquin area, no big deal. 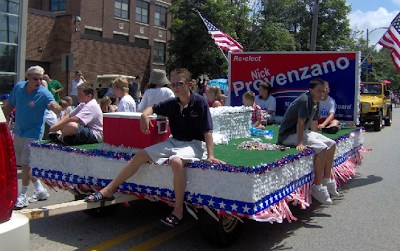 Same problem with the larger sign on his float.

District 3 McHenry County Board candidate Mary Donneer may have had a sign stuck to this beautiful red car, but the picture doesn’t say whether it uses the word “re-elect.” 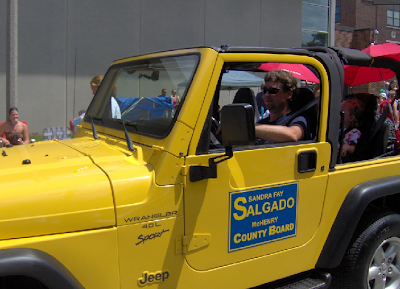 District 4’s Sandra Salgado plays up her incumbency on the door sign on here yellow Wrangler.

Salgado could get in the Founders Day Parade with this, but, like Provenzano, she has no constituents down there. She is the only incumbent Republican office holder that John O’Neill got a photo of walking. 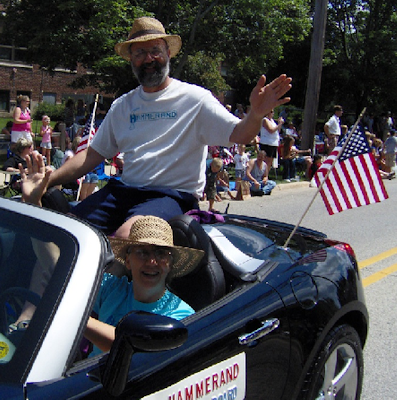 The photo O’Neill took does not provide conclusive evidence, but John Hammerand, District 4 county board member’s sign on the side of the convertible appears to identify him as a county board member, not as a candidate for re-election. 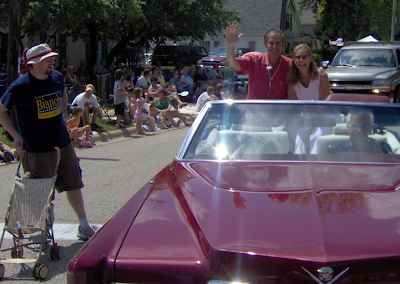 No way to tell if the sign presumably on the side of this splendid old Cadillac carrying McHenry County State’s Attorney Lou Bianchi says he is a candidate, but the tee shirt on the supporter doesn’t say anything about the election. 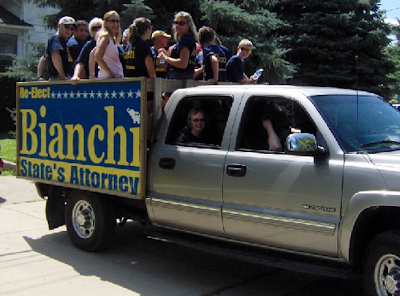 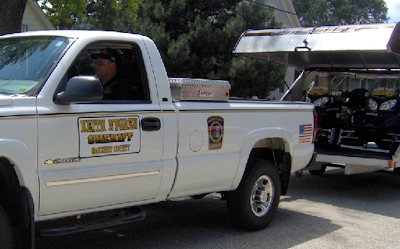 Can’t tell for sure, but Sheriff Keith Nygren’s entry appears to be a county owned vehicle. No electioneering there the Algonquin rule would prohibit. 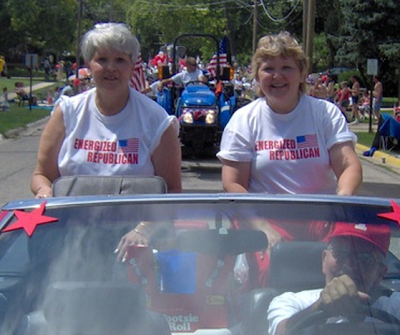