If you have been wondering why posting has been so light, think 11th birthday, niece’s birthday party, hedge trimming, Family PAC cruise, Cub Scout day camp… You get the picture.

My son had Star Wars, Mars Mission and Indiana Jones Lego creations all over the living room, so when party planner (hint: not me) made the suggestion to have a Lego-themed birthday party this year with the inducement that, if that were OK, the son would not have to clean up the Legos, just push them to the side of the room, he readily agreed.

The picture below was turned into an invitation. That may have been the easiest part of the Lego theming. 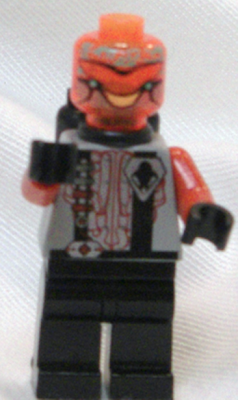 The Friday before last was “get ready for the birthday bash.”

My job turned out to be easy compared to my wife’s.

I picked up the cake she had ordered from Sam’s, then, bought soft drinks and beer I don’t drink from Jewel.

It’s a good thing she took the day off, because it took her F O U R H O U R S to prepare the Lego birthday cakes you see above.

She used a flexible plastic mold that worked fine for making Lego shaped ice cubes, but was a real pain to bake with.

The first try came out undercooked on the inside. The outside tasted great, especially the little round bumps used in real Legos to attach one to another. 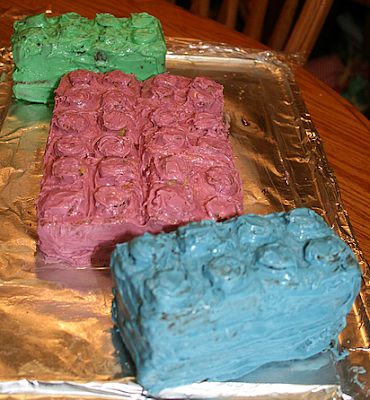 Once four batches had been cooked, my wife tried to ice them. You’ll note three different colored icings. Red, green and blue, I guess, but someone may correct my colorblind perceptions.

Some word that I do not use on this publication adequately describes the difficulty of the task.

You see, the little round bumps would not stay attached to the cake, which turned out to be luscious—almost tasting
like sponge cake.

Ask my bride to tell you how easy it is to use icing to “glue” those little bumps back in their original place.

Instead of going somewhere with the kidlings, my son decided he wanted to replicate last year’s party by having a Moon Walk in the yard.

Now you don’t see it 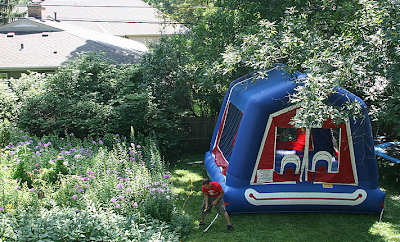 Now you do. The Ed’s Rentals sign on the front of the Moon Walk is not hidden by design.

Tomorrow (or as soon as I get it written) – The Saturday Birthday Bash.