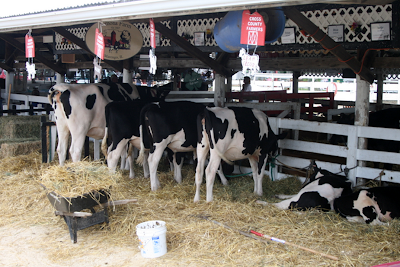 Finally made it to the McHenry County Fair Sunday afternoon.

Should have gone earlier. The price for us old geezers was only $3.

Naturally, I decided to find all the political booths. I went by the two power party booths, not once, but twice, to see if I could pick up more candidates.

Not counting candidates with booths financed by tax dollars (these are the folks the Algonquin Founders Day Parade committee call “office holders”), the Republicans, Democrats and Libertarians were represented.

Because the Democrats had the most candidates, I’ll start with their booth.

It was a double wide one. 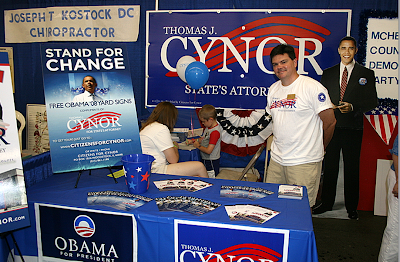 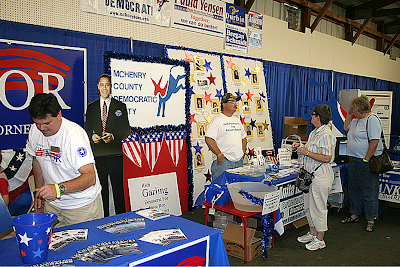 Chair Schmidt got me to pose with the Barack Obama cardboard cutout—a duplicate of the one my wife posed with on Navy Pier last week while we were waiting to board the Family PAC cruise boat.

Obama’s image was brought out so I could have my picture taken with it.

How bold these Democrats are!

But, I might be bold, too, if my party had gotten more primary votes that the established power party for the first time since that power party was founded and took control of McHenry County government.

They printed out a copy, but, with my scanner on the fritz, I asked that it be emailed to me. I’ll turn it into a message of the day.

On the way out of the building, I found a man wearing a Kerry Julian, Auditor, McHenry County tee shirt walking toward the Democratic Party booth. He is challenging Republican County Auditor Pam Palmer.

It turns out it was the candidate himself.

When I came back, there was another candidate.

A good turnout of candidates, I would say.

= = = = =
The Holstein cows at the top expressed no political preference.