This year, no candidate graced my son’s birthday party.

Two years ago, Constitution Party candidate for governor Randy Stufflebeam found me at ’s Gate 7 Beach. I took him and his parents home for eats (Italian wives always have more than enough food for a party) and the political folks got treated to his pitch. 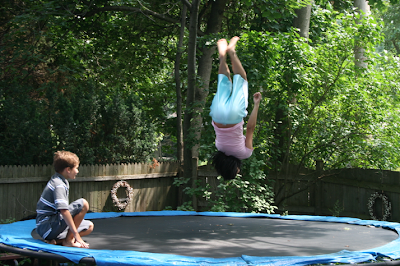 No such luck this year.

The adults had to provide their own conversation topics.

Or watch the splendid display of a gymnast on the trampoline next to the Moon Walk.

In any event, I got an email from Stufflebeam outlining the Constitution Party’s candidates, which include northern ’s Chad Koppie for U.S. Senator, and I though I would share it with you.

Sometime right before the fall election, there may be a small article explaining “those other guys on the ballot.”

You know, the Libertarians, etc.
If you read this, you’ll be that far ahead of the Left Stream media curve with another of the “etc.’s.”

Sufflebeam also provides a glimpse of what people are thinking in , which is southwest of . I went to the same county fair in 1982 when I was the Republican candidate for State Comptroller.

Many Constitution Party members were out this past weekend attending the various events throughout the state letting people know that the Constitution Party of Illinois will have Chuck Baldwin, Darrell Castle and Chad Koppie on the ballot, statewide, in this November’s elections.

I took the opportunity to attend the Bond County Fair on Saturday. As some of you know, my parents live in (the heart of ) and we stayed there after retiring from the Marine Corps while looking for a job. It was a real treat to see so many of the people that I got to know during my stay there. It was also a privilege and an honor to meet so many that said to me, “I wrote in your name for Governor.”

Just a side note – The veterans of did an awesome job with the veterans’ memorial which included the Traveling Memorial Wall. It nearly overwhelms me every time I see all the names which represent the lives given. The phrase, “Freedom is not free” rang loudly in my mind. I don’t know how many acres were dedicated to the memorial, but it was big enough that they were offering tractor rides to and from the memorial.

One of the things that I did not expect was the poignant confirmation of the prediction that I made over a year ago about the nation doing the same thing did two years ago, when the Republican and Democrat parties offered candidates that so many citizens had to hold their nose to vote for. Out of the many, many people that I talked to last Saturday, only one person indicated their enthusiastic support of their candidate. Everyone else complained about who they were left having to vote for, which allowed me to introduce them to the Constitution Party of Illinois’ candidate that WILL BE ON THE BALLOT that they can vote for without having to hold their nose.

The sad thing is that I found so many of them letting fear drive their lives — the fear of the other candidate being elected. It didn’t matter if the person was Republican or Democrat, the answer was the same, “I’ve got to vote for McCain to keep Obama from winning” or “I’ve got to vote for Obama to keep McCain from winning.” We heard exactly the same reasoning here in two years ago. I had one person specifically tell me in 2006, “Randy, I know you are the person who should be governor. However, I have to vote for Topinka to keep Blagojevich from winning.” Just one question, “How well did that work out for him????” For those of you who don’t live in , Blagojevich won the election.

While at the fair on Saturday, I repeated the story of “The Wrong Lizard” many, many times to people who told me they were going to have to vote for the “lesser of two evils” to keep the other guy from winning. In April of 2006, Paul Mitchell (who writes a blog called, “Thoughts of a Regular Guy“) wrote an article called, “The Wrong Lizard.”

The story is of a Democratic Planet which is inhabited by humans and lizards. However, in this democracy, humans are ruled by Lizards. Why???? It’s because humans keep voting for lizards because they are afraid that the “wrong lizard” will win. Sound familiar?? We live in a democratic nation which is inhabited by liberals and conservatives. You decide which one is human or lizard. How long are we going to keep the lizards in power?

To the press release that I sent out last week, I received the following response:

“You may divert a few votes from the Republican and thereby help elect a man who has absolutely NO respect for the Constitution. But I have grandchildren who I don’t want living under a new fascist regime under Hussein Obama so I’ll be voting for McCain. WE can recover from McCain but not from Obama and Dem congress.”

First of all, the person should look up the difference between socialism and fascism. Because, in my opinion, that’s the true choice we have between the two candidates. Again, I’ll let you decide which one is which, but if you really want to know, ask me and I’ll tell you what I think, but for now, I’ll save that for another message.

I sent the following excerpts in response:

“This persistent voting for the lesser of two evils is exactly why this country continues to head down in to the abyss.”

“You want to know why this whole idea of recovery from McCain is a joke and a pipe dream? It’s because in 4 years, you’ll be using this very same excuse as to why you need to vote for the next lesser of two evils.”

“By the way, we are also diverting votes away from the Democrats as well.”

It is a never ending cycle. How many of you remember the Kerry/Bush elections of 2004? I heard the same thing then. With this practice of voting for the lesser of two evils, we will never recover. This country will continue to head towards the cliff, whether at a hundred miles an hour or fifty. The only way to recover, as I told this person in the same message, “is to stop exercising the very definition of insanity by doing the same thing over and over, yet expecting different results.”

You have to start voting FOR someone, instead of voting AGAINST someone in order for this insanity to stop.

The Constitution Party of Illinois has three candidates state wide for whom you can cast your vote FOR:

Locally, the Constitution Party of Illinois has three candidates that can be voted FOR in their local communities and districts.

= = = = =
You can see what Randy Sufflebeam (seen with balloons in background two years ago talking to politically-interested 9th birthday party participants) missed by not showing up at my son’s 11th birthday.

There were the gifted gymnast doing flips on the trampoline, snow cones, Keely Cat, who couldn’t figure out why he was left to guard the Lego candy bowl, opening gifts, crafts, the Moon Walk and, had he stayed late enough, hulu hoops lighting up the night. Of course, there was plenty of food left over. And, don’t forget about those Lego-shaped cakes, the topic of the first birthday story.

Is my wife a party planner or what?