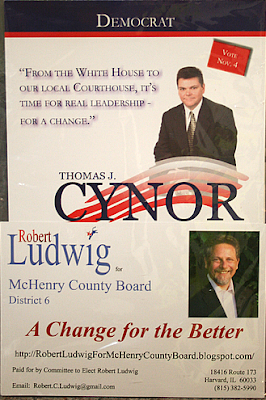 On the west side of Wonder Lake in Greenwood Township is Highland Shores, where my in-laws live.

My mother-in-law is quite good at saving politic messages for me.

I hadn’t been up in a while, so my reporting on this hand out by McHenry County Democrats is a bit late.

It arrived on my in-laws’ door knob a couple of week ago.

It features 8 ½ by 6 inches pieces for McHenry County State’s Attorney candidate Tom Cynor and McHenry County Auditor candidate Kerry Julian, plus the same size piece from the McHenry County Democratic Central Committee. The latter has web sites for all the candidates who have them. 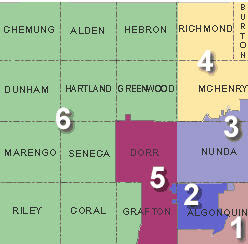 There is also a smaller card for McHenry County board candidate Robert Ludwig. I believe he is the one who didn’t have a sense of humor about my pointing out that the Emerald Ash Borer leaves a “D”-shaped hole in trees it is attacking.

This is the second time that Democrats have been out working in County Board District 6. In late June, they worked the Sun City portion in Huntley.

I guess they don’t believe that their county board candidates’ having gotten fewer primary election votes that the victorious Democratic Party candidates means they’re not going to win in November.

I wonder if any Republicans in District 6 are going door-to-door.

If you receive a little baggy from McHenry County Democrats, please drop me an email.