Chief McHenry County Circuit Court Judge Sullivan J. Sullivan has so many mortgage foreclosure cases on the docket that he is setting up special calls each week.

The cases will be heard Tuesdays, Wednesdays and Thursdays, starting at 10:30.

Sullivan himself will hear the cases.

Fifty cases will be on each day’s docket.

The dockets for September 2nd, 4th, 9th and 11th are already filed. 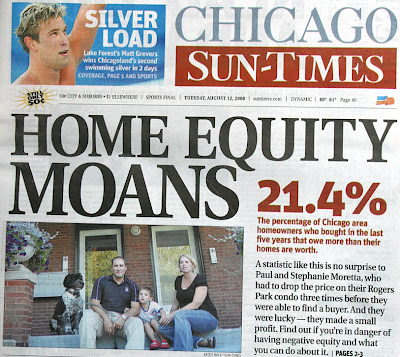 As the Chicago Sun-Time pointed out this week, lots of folks who bought homes in the last five years have properties with mortgages larger than their homes’ current values.

And the number of foreclosures has about doubled from last year.

While not all of the chancery court call cases are foreclosures, most are.

Tuesday, the Chicago Sun-Times ran a front page headline about the problem. 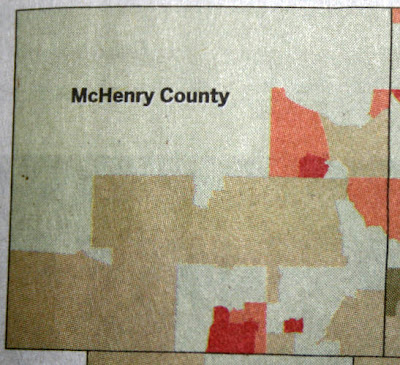 Inside was a map showing a map with percentages of homes bought in the last five years where current values of homes is less than the mortgage.

Most of southeastern McHenry County seems to have over 20% of recent home purchasers in that predicament. Large swatches of Algonquin, Lake in the Hills, Huntley and McHenry seem to have over 31% of new homeowners without enough equity to pay off their mortgages.

= = = = =
Click to enlarge especially the Sun-Times map on top and the March Chicago Tribune map on the bottom. An April, 2008, story about the Tribune map can be found here in which it is noted that Huntley and western Lake in the Hills appear to have the worst problems in McHenry County.