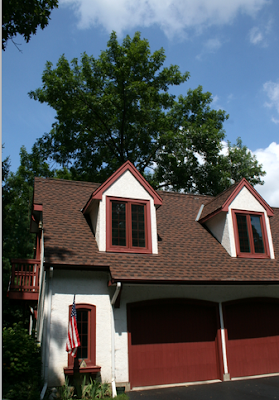 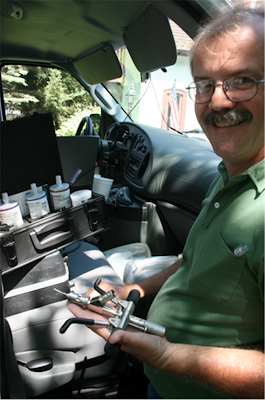 Walt Southern convinced him not to chop down lo those many years ago.

Lots of folks are arborists, but only about 300 are Board Certified.

White is one of those.

He has perfected the methodology to save ash trees from the Emerald ash borer with a five year course of treatment.

He arrived in my driveway in a brand new panel truck.

He’s going to wrap it with his advertising cartoons and messages like the one you see above.

Maybe by the time he makes his next trip from the Detroit area, it won’t be plain white, but wrapped to advertise his business like the truck with the visible tanks whose picture he sent me. 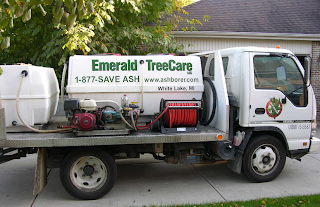 With local towns figuring how much it will cost to cut down every ash tree on public property, wouldn’t you think at least one of them might do a cost benefit analysis to find out if poisoning the little green critters over a five year period might cost about the same as cutting them down and planting a replacement?

Even if it cost a bit more, keeping a mature tree might be worth something.

After he finished treating our ash, White showed me his successes. 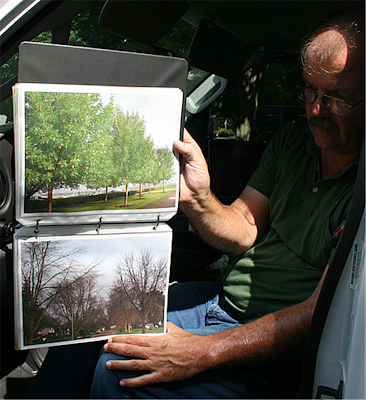 The most dramatic was from the Oakland County International Airport. (See Chapter 8 of www.TreeResearch.org’s Emerald Ash Borer, The History and Control of EAB.)

He held up his book of photographs. On top were healthy trees at the airport. They have been treated five years now.

On the bottom is what the neighborhood looks like on the other side of road. He said it is what Naperville will look like five years from now (except with bigger homes) if its ash trees are not treated.

Because of the lack of leaves, you might think it is winter in the bottom pictures. But it is summer. You can tell by the green grass. (Click to enlarge photograph.)

The chemical has been around a long time. It’s called imidicloprid. It’s biggest use is probably killing Japanese Beetles.

It’s how the Arbor Systems-supplied pesticide is applied which is the key.

Competitors drill holes in the ash trees and inject the liquid. 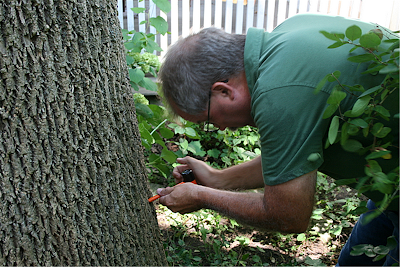 White punches through the bark, but does not disturb the cambium as drilling does. You can see White using his punch above. 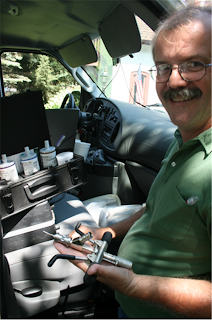 The cambium is the layer through which water is transferrred primarily up the tree and sugars travel primarily down the tree. Drilling disrupts this natural flow system and cause the tree to comparmentalize (wall off) this wounded area.

Next, the Master Arborist uses the instrument especially designed by Arbor Systems called the Wedge Tree Injection System to inject the chemical behind the bark. A close-up of White taking the syringe-like injecting device can be seen above.

Below you can see him working his way around the tree. 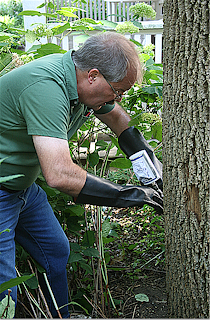 After finishing injecting the tree, White goes for the combination pesticide and fertilizer which is contained in tanks in his truck. 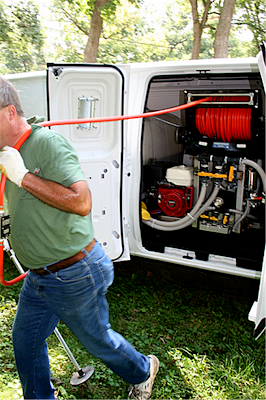 When he reaches the tree, he uses his foot to push the tube for injecting the liquid into the ground. You can see how some of it spreads out of the relatively little hole punched in the ground below. 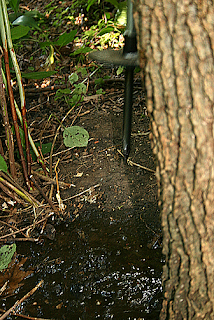 So, one application of pesticide and fertilizer a year.

Guaranteed to keep the ash tree alive and uninfected by the Emerald Ash Borer for a year.

Five years of treatment should save the tree, White told me. He points to the thriving Detroit-area ash trees as evidence.

White is beginning to advertise in the Chicago area. Below is one of his ads. The web site address is www.AshBorer.com. The email address is Save the Ash.

My thanks to the discoverer of the first Emerald Ash Borer in McHenry County, Stan Gladbach of Algonquin. His research got me in touch with Wayne White. 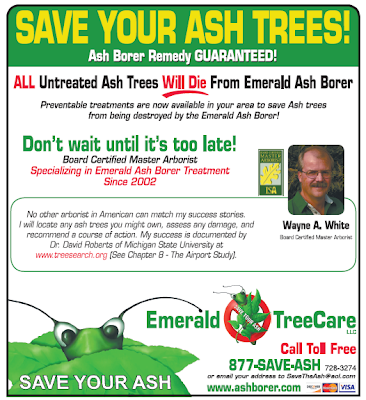 He told me that those contracting for large numbers of ash trees can get a discount.