Advance 300) >were excessively optimistic, you just need to some math on Chicago Tribune reporter Mark Shuman’s article on the opening of Hampshire High School. 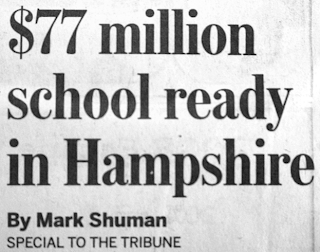 It cost $77 million, the article says.

The referendum was for $185 million. 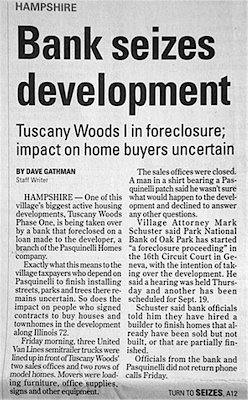 38% of the referendum cost.

And, it’s not as if opponents were not predicting that developers and municipal sources were overly optimistic.

In other news, Elgin’s Courier News has as its top story Saturday that Hampshire builder Pasquinelli Homes going belly up on its Tuscany Woods I. Reporter Dave Gathman. Its bank, Park National Bank of Oak Park “has started ‘a foreclosure proceeding’” in Kane County Circuit Court, the story says.