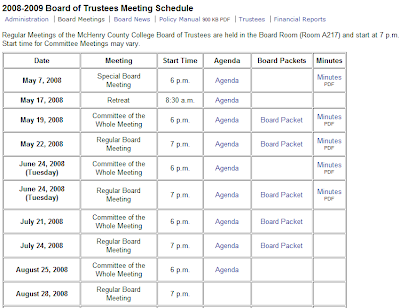 I don’t look at the McHenry County College web site every month, but, since tonight is a Committee of the Whole meeting and lots of sneaky things have happened at what the board members call “COW” meetings, I looked.

This is the third time the information given to the board members has not been available to the public.

The meeting starts are 6 PM, less than five hours away.

The last time was in April. The time before was in March.

I first found it posted in February.

It was quite a change for the better to obtain online access to the reports to be considered by the board. For months, folks like me sat clueless as to what was being discussed because of the board’s lack of transparency.

It doesn’t look as if much interesting will be happening tonight. 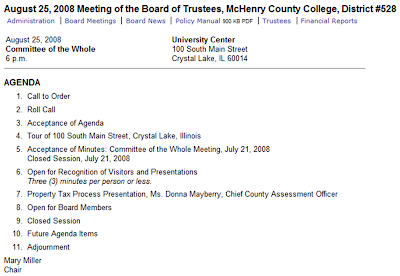 Those who would like to learn more about the property tax assessment process will apparently get a short course from McHenry County Supervisor of Assessments Donna Mayberry.

I left a message in President Walt Packard’s voice mail a little after one this afternoon. Maybe I’ll get a call back saying the board packet has been posted.

If you plan to attend the board meeting tonight, it is at University Center, 100 South Main Street, Crystal Lake, not on the main campus. For old timers, that’s the old Oak Manufacturing building.

The images can be enlarged by clicking on them.

= = = = =
I received a phone call from President Packard’s office, but didn’t realize it until Wednesday. It seems there was no board packet for the Committee of the Whole meeting. Perhaps in such cases, a note could be added to the MCC web site to that effect.