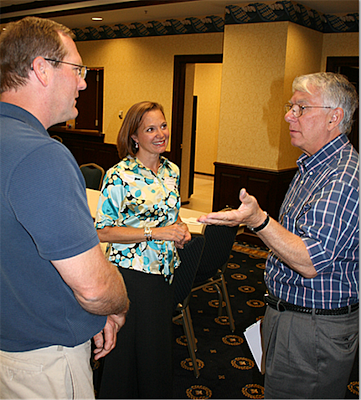 The main topics of conversation were taxes and paying for health care.

“If you allow the tax cuts to expire, then you end up with a large tax increase,” the congressman explained.

He talked of the cuts the Republican Congress had passed and President Bill Clinton signed, including the college savings accounts, the Roth IRA and the accelerated depreciation for business and ending the marriage penalty.

After two members of Congress got married and discovered they owed $35,000 more in taxes, “they became great advocates of tax relief,” Manzullo related.

The Republican explained that Senator John McCain voted against the tax cut package that Bush signed because it was not offset by spending cuts.

McCain has said he does not favor allowing those tax cuts to expire because that would be a tax hike. 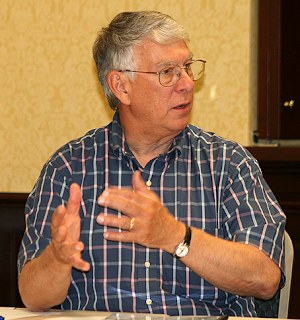 Manzullo told of a friend of one his staffers who went to Montreal, discovered a bladder infection after business hours on Friday and could not get treatment until Monday because it was not an emergency. To this day, she has related medical problems.

Manzullo explained that the health insurance he has as a member of congress is Blue Cross/Blue Shield. No dental insurance and chiropractic care just added this year.

When his wife Freda had cancer, it cost the family $10,000 in out of pocket expenses.

He favors allowing each American to write their own policies.

If they wanted coverage for just catastrophic illness, their premiums would be much lower than for those with first dollar coverage.

There was much more, of course, but it’s the first day of school on Wednesday and I’m the one taking our son to school.

Manzullo is being challenged by Barrington Hills Village President Robert Abboud on the Democratic Party ticket and McHenry County College Board member Scott Summers, a member of the Green Party.

= = = = =
In the top photograph, U.S. Congressman Don Manzullo can be seen talking to Chris Dahm of Woodstoc’s Dahm Trucking and Lou Gajdzik of Stoxen Farms in Harvard. Below, Manzullo is seen talking to the NFIB members and prospective members. Pictures may be enlarged by clicking on them.