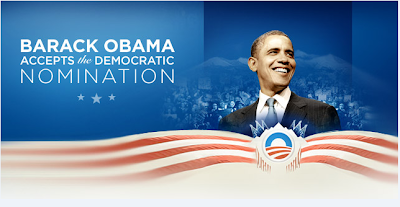 Crystal Lake’s John Coonen jotted down his thoughts about Democratic Party Barack Obama’s acceptance speech and shared them with me. I asked if I could publish them and he gave permission:

“85,000 gushing fans and Hollywood celeb’s, including Oprah (with her diamond-studded sunglasses which sickeningly spelled out the word O-B-A-M-A on the sides) gathered ’round the Romanesque Coliseum, set on an historic day and place to help us somehow associate M.L.K. and J.F.K. with B.O. …his 85,000 adoring fans and millions of TV viewers were all lied to within the first line of his speech when Barrack Obama accepted the nomination uttering the words: 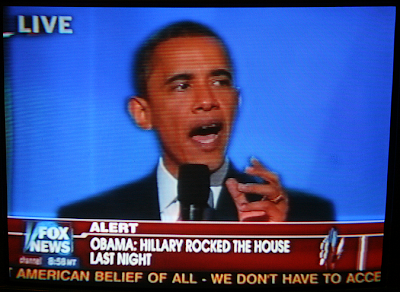 “I brought out a couple buckets for people watching with me because we ’bout tossed our cookies, and the speech hadn’t even started yet.

“I was honestly hoping for a speech like the one I remember he delivered in Springfield, in sub-zero temperature.

“That was a phenomenal speech – not that I’d ever vote for the guy (I’m pro-life, and he’s extremely pro-abortion), but it was a great speech he delivered in Springfield.

“I suppose after months of campaigning, and chummin’ up with the Clintons, Bidens and Durbins, it’s not Washington that rubs off, it’s a distorted perspective of reality that sinks in.

“I suppose I should stop being amazed that millions of Americans are drinking the kool-aid the party’s serving up en masse, but the death of amazement and outrage leads to loss of hope.

“Too bad complaining about the hubris and set architecture won’t change the fact that conservatives have got an uphill battle ahead. The only solution is getting conservatives out to vote on November 4th, or this country’s in deep.

= = = = =
The photo of John Coonen was taken at the Pro-Life Victory Committee’s Pig Roast at Resurrection Center.

If a Barack Obama supporter would like to present a counterpoint, email it to McHenry County Blog.