A couple of teenage boys were arrested late last week for robbing the Castle Bank in Huntley on March 10th.

Seems a bit strange that they would be from Hinkley, which is straight down Route 47 and west on Route 30 in DeKalb County south of the City of DeKalb.

Matthew Reno is identified as 18 and Justin Fasel as 17 by Daily Herald reporter Lee Filas.

The same two are charged with trying to rob the First Midwest Bank in Union on March 23rd. 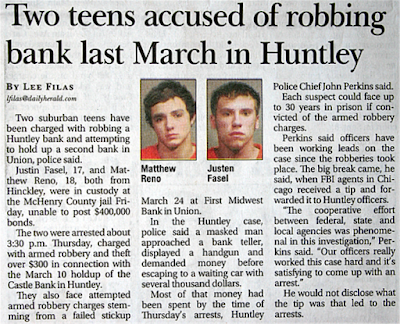 He would not disclose what the tip was that led to the arrests.”

I don’t know if these two would fit any of the categories listed below by Stop Prisoner Rape, but if they do and are convicted, they are in for a world of hurt in the Illinois Department of Corrections…when preventing rape in prison is not a high priority…if one at all:

are particularly vulnerable to being abused while incarcerated. Detainees who have been sexually assaulted in the past are also identified as likely victims of further abuse.”

That’s pretty much what I concluded when I served on the Illinois House Prison Reform Committee.