The “sky is falling” mentality has not taken hold on the McHenry County Board yet, it seems.

“Why didn’t she say something then?” the Democrat asked.

Think anything like this will happen in McHenry County?

Before you gasp at my question, remember that the Illinois General Assembly voted not to take a pay raise, even though Senate President Emil Jones wanted it in the very worst way.

Here’s what each county board member was paid last year:

County board salaries are tied to the local Consumer Price Index through August, which has not yet been released. However, July’s is public. It showed an increase of 5.8% over a year ago.

So, county board members can expect almost a 6% increase in their salary compensation next year to a total of about $19,700. 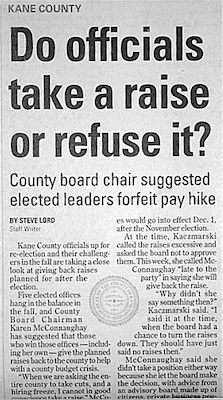 The salary of all county officials, up for election this year (but state’s attorney (which is set by state law) $89,530.

Here are the scheduled increases for countywide officials up for election this fall:

Elected Officials may choose to participate in any or all of the benefit programs made available, now or in the future, to all County employees including, but not limited to medical, dental and optical plans subject to the same rates, benefit levels, rules and regulations established for all County employees.