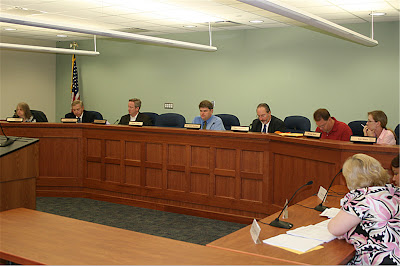 Just before tonight’s Huntley School District 158 Board meeting, Huntley Education Association Co-President Julie Hunter handed a sheet of paper across to the board and superintendent.

On HEA letterhead, it said,

Teachers’ union officials have repeatedly said they won’t go on strike while they are still negotiating. 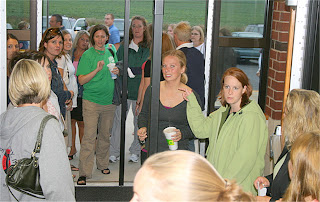 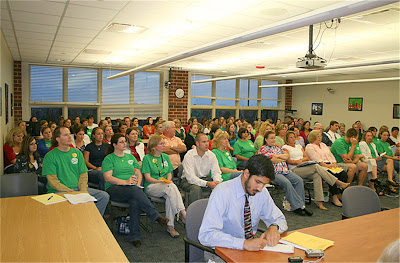 They filled the room to overfilling. 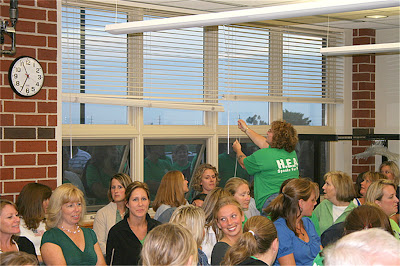 One teacher even raised the Venetian blinds and opened the windows
so teachers standing outside could see and hear what was going on.

Only one teacher, 29-year veteran Jean Ziller, spoke to the board. A Learning Disabilities teacher with a master’s degree at Conley Elementary School, Ziller said she earned $80,869 last year, would get $81,466 this year, but after retirement, medical and another expense I didn’t catch, she would be getting $800 less than this year. $44 less each pay check.

“I don’t know about you, but I don’t think this is acceptable,” Ziller said. 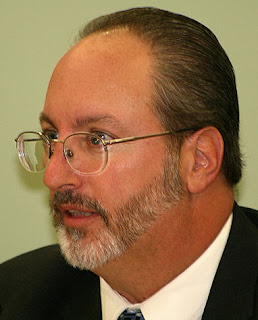 CPA Board member Tony Quagliano did something board members usually don’t do.

“If you are off schedule (which I took to mean at the top of the schedule), you would be getting a 2% increase,” Quagliano said. He calculated that to be an increase of $1,638.

“So, with all due respect, I don’t agree with your math.” 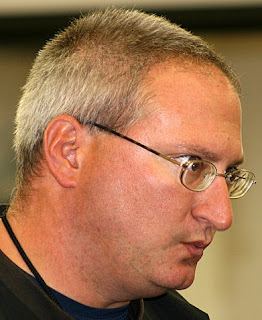 The board’s Financial Advisory Committee Chairman Eric Zornow reported that “the biggest thing we noticed in the budget is there is no contingency and things always come up.

“With regard to the contract,” he continued, “as you negotiate with the teachers until both sides can agree on the bucket of money…it’s really hard to start giving on certain items. There isn’t a magical way to increase the dollars.”

“The board would agree with that,” Quagliano said. “We’re not clear there’s a clear understanding among the teachers between deficit spending and a fund balance.”

“(We’re) getting half of our money in June (from property taxes), so the end of June balance is like looking at your checking account the week after pay day,” Zornow observed. 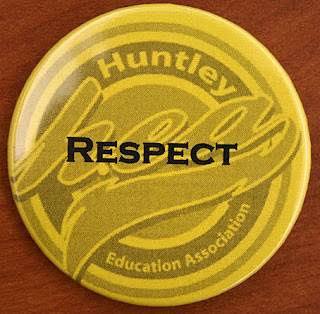 “There’s a true lack of understanding,” Quagliano continued. “I was handed something today that is complete misinformation. People are showing figures that are not true, making statements that are not factual.”

After the teachers walked out of the room, one woman returned and gave Quagliano a button saying, “RESPECT” on top of “Huntley Education Association” and “hea.” He let me have it for my button collection.

Comments made during and after Thursday night’s meeting led me to the conclusion that parents in Huntley Schools should be looking for people to take care of their kids Monday.

= = = = =
The head shots are of board member Tony Quagliano (on the right) and Financial Advisory Committee Chairman Eric Zornow on the left.

I arrived early to the board meeting and board member Kevin Gentry told me the Homecoming Parade was being held Thursday night. Sometime this weekend, I’ll get up the pictures I took.