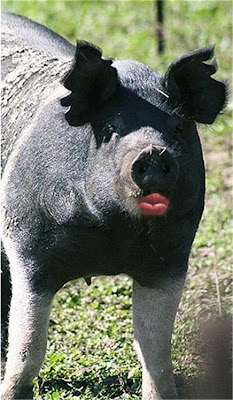 The day after Barack Obama used the phrase “Lipstick on a Pig,” three liberal writers for the Chicago Sun-Times covered the subject. Two jumped to his defense.

I can’t remember the time when

wrote about the same topic with pretty much the same twist.

First in the paper was Mark Brown.

“Palin cornered the market on lipstick”

He advises the Obama campaign to “leave her alone.” 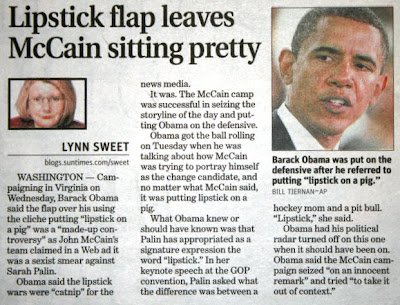 Next was Lynn Sweet’s

“Obama had his political radar turned off on this one when it should have been on.”

On the facing page was Richard Roeper’s column:

So, if a party’s candidate is not swift enough to figure out that some women might take offense at his intimating that the opposite party’s good looking female vice presidential candidate was a pig, is he up to being president?

That’s a pretty big lapse in judgment, it seems to me.

= = = = =
Thanks to Heck of a Guy blogger Allan Showalter for putting lipstick on one of my pig pictures. You can get a closer look at the pig with lipstick by clicking on its touched up photograph.

If you want to eat some good pig, although probably without lipstick, Crystal Lake’s Second Chance House is holding a pig roast at the Dole Mansion from 1-5 Sunday. $10 for those 12 and over; free for those younger.

And, an update on the pig parts shown on poster:

Thanks for the continued interest in our charity.

I was going to attempt to cook the pig again this year (sans Italian sausage) but the Board of Directors felt that my energy would be of better use by networking with the attendees!

At least that’s what they told me.

I think it might have been just a nice way of telling me they were afraid of me burning the Last Chance House down.

So they’ve decided to have the pig roasted by professionals this time!

The picture you saw on the flyer was just something our web coordinator got off the web. Hope to see you at the Dole Mansion on Sunday. I think we’ll be inside if it rains.