The Norge Ski Club will host a two-day competition in Fox River Grove this weekend. Here is a press release about the event:

NORGE READY TO TAKE ON WORLD

Perhaps it’s the repetitive sound of the Olympic march in Beijing or the patriotic feeling in the gut as athletes stand upon the podium to receive their medals… whatever the reason , the passion has certainly been absorbed by the young ski flyers of the Norge Ski Jumping Club in Fox River Grove.

For years the skiers have been training longer and harder than ever before and many club members believe that now is the time to pull out all the stops and provide whatever support is necessary to place one of its members on the Olympic team.

According to Norge spokesman, Charlie Sedivec, “there are three immediate requirements to make this dream a reality.

Norge will hold a two day competition on September 20 and 21 which will include a junior meet at 2PM on Saturday followed by a “Super Tour” competition at 6PM that will feature many of the top ranked ski jumpers in America.

Another “Super Tour” meet will take place on Sunday at noon. Because both tournaments are classified as “Super Tour,” top ski jumpers from across the nation will be in attendance in efforts of gaining points which are needed to secure a spot on the Olympic team.

Norge is required to raise the winning stakes, house the skiers, make special modifications to the hills as well as other financial obligations that go along with being selected as a sight for a “Super Tour” competition. 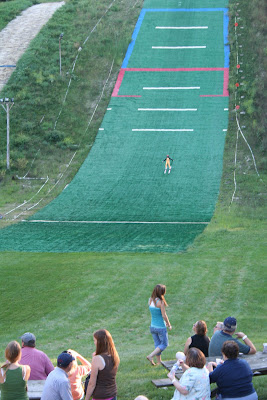 Norge is also in the process of inviting top ski jumpers from around the world to compete in the largest international ski jumping event in Norge’s 104 year history in January, 2009. Skiers from Poland, Norway, Switzerland, Ukraine and Russia are expected to challenge our American athletes.

On Saturday, September 20th, following the junior tournament which will end around 4PM., there will be live music provided by the very popular southern rock sounds of “Goin’ South.”

The band will play from 5PM till 6PM and in between rounds of competition as well as after the meet. There will be food and beverage stands on the grounds so carry-ins will not be permitted.

Admission is $15 at the gate which is good for both days plus the band concert or $10 in advance prior to 4PM on Saturday if purchased at Dominicks or Ace Hardware in Fox River Grove. You can also purchase Pre-Sale buttons on the club grounds during the junior competition prior to 4PM. For further information call Norge Ski Club at 847/639-9708.