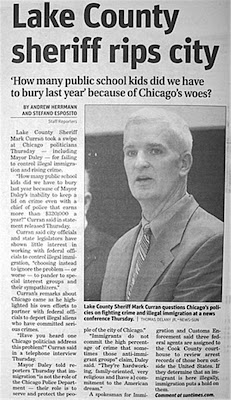 Remember the meeting with Ohio Sheriff Dan Beck who spoke to the Illinois Minuteman Project?

That’s the one that the Crystal Lake Holiday Inn banished when the McHenry County Peace Group said its members would demonstrate on Route 31 and the Crystal Lake Police Department demanded the Minutemen pay for protection.

Eventually, the meeting was held at McHenry County College. The police were there in force, but the Minuteman didn’t have to fork over money to exercise their Freedom of Speech.

In a follow-up article last December, I noted that Lake County Sheriff Mark Curran, a Democrat, was seeking training for his deputies so those who were found to be illegal aliens could be deported. (This is not necessary, according to Sheriff Beck.)

Friday, Lake County Sheriff Mark Curran popped back in the news on the illegal alien front. 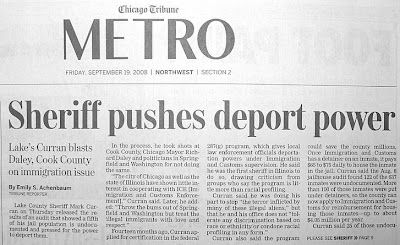 Pointing out that 20% of those in his jail were illegals, he complained that he did not yet have the power to send them to ICE for deportation. He applied for such authority 14 months ago, the first Illinois sheriff to do so.

He said shipping them out would save over $4 million a year, according the the Chicago Tribune.

Here’s a twist I hadn’t hear of before:

“Once Immigration and Customs has a detainer on an inmate, it pays $65 to $75 daily to house the inmate in the jail.”

Along the way, he blasted Mayor Richard Daley and Springfield and Washington politicians for not doing more:

“How many public school kids did we have to bury last year because of Mayor Daley’s inability to keep a lid on crime?”

Now, Democrats are wondering if he is a “born-again Republican.”
You see, he also endorsed the Republican State’s Attorney.

Curran was also the guy who spent a week in his own jail to scope it out, coming out calling for prison reform.