In late 2006 Illinois State Police investigated a complaint of unusual deaths at the Woodstock Residence nursing home. Within two weeks they identified a primary suspect and had her removed from duty.

If they had the right suspect the deaths logically should have ended.

When news broke in Mid-November, 2006, that there an investigation was underway Chicago Sun-Times reporter Dan Rozek wondered how big the case might be. He asked McHenry County Coroner Marlene Lantz for figures on recent deaths at the home.

The disturbing response was that almost twice as many people had died at the facility in the first 8 1/2 months of 2006 as in all of the previous year, 34 versus 18.

According to Lantz, no one ever asked about the number of deaths again. McHenry County Blog did, though.

In the raw data Lantz provided, the dates of all deaths at the home, no pattern was readily apparent. A pattern began to emerge, though, when the daily deaths were combined into a running 12-month total. 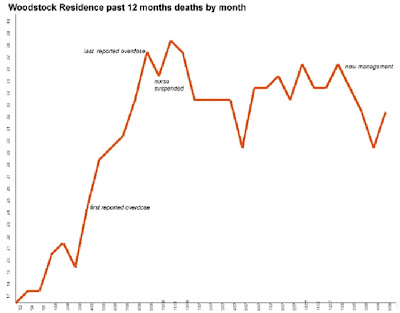 From what had been a three-year steady baseline the number of deaths at the Woodstock Residence began to rise at the beginning of 2006 although not much. (Click to enlarge the graphic.)

In April, however, there was a marked increase.

The deaths continued to mount through the summer until a pause in October when police began interviewing witnesses.

The chief suspect, apparently Lake in the Hills LPN Marty Himebaugh, was suspended at the end of that month. Himebaugh was indicted this year on charges of abusing patients at the home by overdosing them with morphine and other drugs.

The next month, though, with Himebaugh gone, the deaths reached a new peak and remained at high levels for the rest of the year and throughout the next as well.

Only when the Woodstock Residence was sold this past January to new management did the number of deaths fall back again.

In fact, death rates at the home may have been even worse than the raw number of deaths indicated. The Woodstock Residence has been customarily described as a 115-bed facility.

However, according to Illinois Department of Public Health spokeswoman Melanie Arnold only 81 of those beds were occupied when the investigation began in October, 2006. By April of this year there were only 71 residents at the home, she said.

In other words, although the number of deaths at the home fell somewhat in late 2006 and 2007, the rate of deaths per resident probably stayed about the same as it had been in early 2006 when investigators claim six people were drugged to death.

The fragments of the still-secret State Police reports incorporated in the Illinois Department of Public Health report on the home seem to indicate investigators zeroed in on Himebaugh as prime suspect almost immediately. There’s no indication whether they looked for any others or examined records of deaths at the home.

Sources close to the case report, however, that Bianchi’s involvement in the investigation only extended to securing orders for exhumations requested by Owano’s team.

Coroner Marlene Lantz has no knowledge of the investigation. She’s been complaining for more than a year that Bianchi stonewalled her when she tried to find out about it, saying they involved “cold cases.” That phrasing is another indication investigators may not have looked for victims other than those named by nursing staff at the home. Lantz has said State Police provided her no information, either.

The numbers indicating increased deaths at the Woodstock Residence don’t prove there were more killings that everybody missed.

They don’t, in fact, prove there were any killings at all.

A report requested from Lantz of the past few years’ deaths at all 12 McHenry County nursing homes shows, for example, an unexplained 25 to 33 percent increase in deaths at the county’s own Valley Hi nursing home in 2003 and 2004. Likewise, for the past six years the number of deaths at the giant Alden Terrace home has bobbed up and down apparently at random.

The death numbers at Woodstock Residence show only two things:

Tomorrow: Who’s supposed to be minding the store? Another surprising answer.