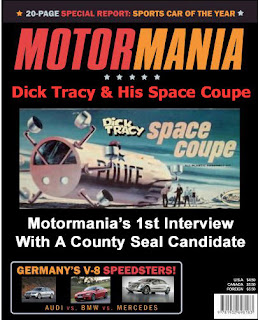 Tracy, after all, traveled to the moon.

So, as Allan Showalter, proprietor of Heck of Guy blog puts it,

“Tracy’s Space Coup, propelled by magnetic fields, is the focus of the Motormania cover story this month, allowing the County Seal candidate to simultaneously reach out to the NASCAR and pro-space exploration voter factions.”

This reminds me of the final exam I had at Oberlin College in 1962. Oberlin College Professor Aaron Wildavski’s open book American government 24-hours exam proposed a question about how students would capture the green cheese concession on the moon.

I created all sorts of interest groups supporting my campaign to gain government approval to market the green cheese.

It was probably the most fun I ever had on a final exam. Got an A-, I think.

Have we left out any constituencies in our campaign to convince the McHenry County Board to name Dick Tracy County Seal?