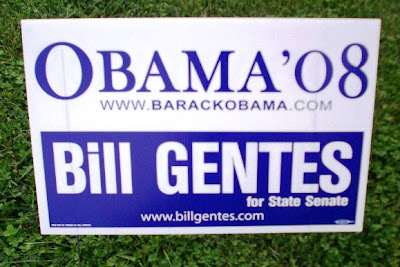 Have to wonder if signs like this will start showing up in all the state legislative districts where money seems to me no object.

And, what will be the impact?

Back in 1996 when my colleague State Rep. Al Salvi was running against Lt. Gov. Bob Kustra for the GOP nomination for United State Senate, we had joint yard signs in my district.

They started out as issue signs. 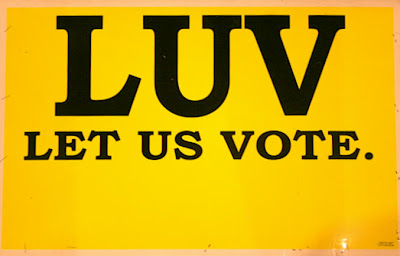 LUV
LET US VOTE
on one side and 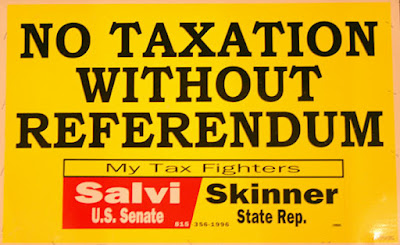 NO TAXATION
WITHOUT REFERENDUM
on the other.

The campaign got hassled by the folks in Crystal Lake, but when my campaign manager Orville Brettman (Carpentersville Village President before he moved to rural Huntley) pointed out the the city legal eagles a U.S. Supreme Court decision out of Missouri where a woman was told she could, indeed, have a sheet of paper opposing the first Iraq War, the city let our signs stay up.

When the time period arrived when candidate signs could go up, we slapped on color coordinated bumper stickers promoting both of our candidacies.

So, we were running a coordinated campaign. He against Kustra and I against John Brehmer, McHenry County Republican Chairman Al Jourdan’s pick.

Until about a third of the votes were counted, we were both getting 55% in McHenry County.

Then, a funny thing happened.

Now, how could that have happened?

One of my supporters later compared the number of votes cast for state representative with the number who voted for Republican precinct committeeman at the bottom of the ticket. Very few of these positions were even contested. And, lots of people don’t vote for uncontested positions.

You know he found?

As the Church Lady used to say,

When the Daily Herald called to ask about my close victory, my comment was something like this:

“They forgot about Barrington Township.”

I had about 13 precincts therein Cook County where the ballots were counted in each precinct rather than taken to a central counting location, as they were in McHenry County. I carried Barrington Township as well as I was carrying McHenry County for the counting of the first third of its precincts.

Strange how the first third of the ballots counted were a representative sample for Al Salvi, but not for me, isn’t it?