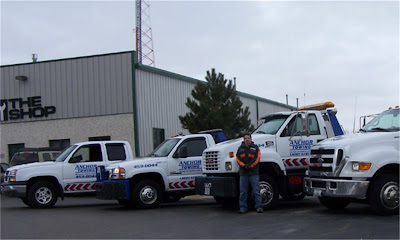 Since McHenry County Blog has covered the issue, I thought you might be interested in reading it.

Mr. Provenzano never replied to my last email you all received. I was able to catch the tail end of the Law and Justice committee meeting this morning.

Nick naturally downplayed the severity of the situation.

He also had Commander Banor of the ICC police available to answer any questions.

Like most of you I believed this should be revisited to give you a fair shot at voting after knowing all of the facts.

What you are aware of  at this point is true regardless of anything that is being downplayed by Nick. Look at Skinner’s blog on the States Attorney’s opinion.

The law says, I cannot tow a vehicle without written and signed consent.

It also states I MUST be able to verify the identity of the person asking for the tow, that’s the law, contrary to what Mr. Banor says the ICC’s interpretation will be.

Nick also says that four (4) towing companies in McHenry County have already paid for the “safety towing”  license and one (1) company out of Union has applied for relocating so “we intend to move forward with the resolution.”

The four companies did pay because of the letter stating it was a law, not because they wanted to.

As far as relocating, which I am not performing, the only one is C & M towing out of Union. I have been participating heavily in all aspects of towing in McHenry County for ten years, I have never heard of them. That doesn’t mean anything for all I know they could be very respectful people, but the point is the only company is eligible for relocating vehicles within a 10 mile radius of Union. No company in any other city or village in this County has applied. All of this and this County is further away from the solution of the minor parking problem we had.

At least this County prior to Nicks introduction to this bogus resolution had the honest services of at least NINE (9) separate companies that were providing relocation as a courtesy to property owners. Now, thanks to the one company from Lake County and our good friend Mr. Provenzano we have one, one that no one has heard of.

I have intentionally left a board member out of this email.

See you in the morning