But the public doesn’t get a chance to ask questions, just the media elite. 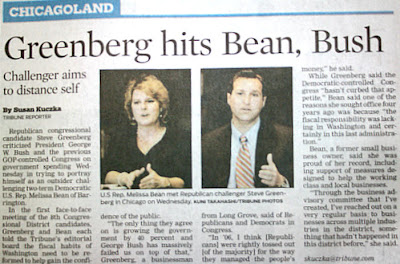 Bean’s hiding from such public confrontations is nothing new.

And the reason is obvious.

Opponents can get under the Bean’s skin. Both Moderate Party candidate Bill Scheurer and Republican Dave McSweeney proved that in 2006 at the McHenry County College debated sponsored by the Northwest Herald.

Both candidates appeared before the Chicago Tribune Editorial Board at Tribune Tower.

And, a very short story appeared Thursday, if you look at the internet version.

Strangely, the print version is longer.

“’In ’06, I think [Republicans] were rightly tossed out] of the majority] for the way they managed the people’s money,’ he said.

“While Greenberg said the Democratic-controlled Congress ‘hasn’t curbed that appetite,’ Bean said one of the reasons she sought office four years ago was because ‘the fiscal responsibility was lacking in Washington and certainly in this last administration.’”

Why do you think those paragraphs are missing from the internet edition?

The article carries the byline of Susan Kuezka in print, but “Tribune staff” gets the credit on internet. In the linked article, the Tribune was outright snookered.

I don’t read any good hits on Bean, do you?

The Tribune is not known for being balanced in covering 8th district congressional races.