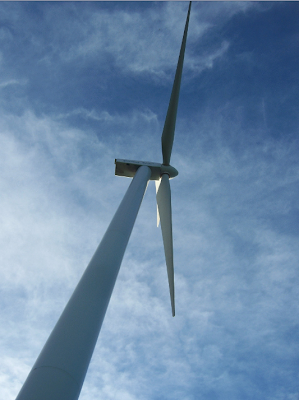 All of life’s decisions involve the comparison of costs to benefits.

Are we willing to stop driving our cars in order to clean up the environment?

Since Earth Day, the answer has been a resounding, “No!”

What are we willing to do?

Drive less polluting cars, even if they cost more, among other things.

I don’t like the new layout of the Chicago Tribune, but the article you see below was effective.

It reports that the Midwest could be energy independent, if wind mills were put in the Great Lakes.

The problem is that offshore wind mills would not be close to electric transmission lines, as present and potential land-based sites are. 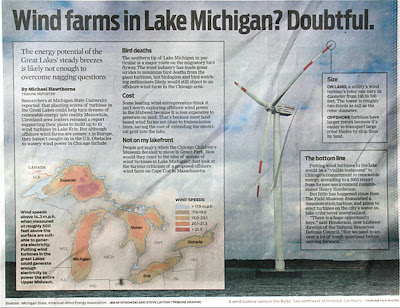 14.3 miles per hour wind at 500 feet is what is needed to generate electricity. Those wind speeds are all over the Great Lakes.

The major objection in New England’s Cape Code has been visual pollution.

But, most people in Midwestern metropolitan areas can’t afford a view of one of the Great Lakes.

But, rich people have more political power than those of us in the sticks.

Another objection will be the potential of migrating bird deaths, even though “the wind industry has made great strides to minimize bird deaths,” according to Tribune reporter Michael Hawthorne.

I well understand that from the objections to the building of cellular towers I heard about while I was state representative.

So, will the Great Lakes become a source of electric energy?

= = = = =
Photo of wind mill by Stan Gladbach. The image of the article may be enlarged by clicking on it.