And the message might be considered humorous, if you really think a President Barack Obama and a Democratic Party-dominate Congress will raise taxes. 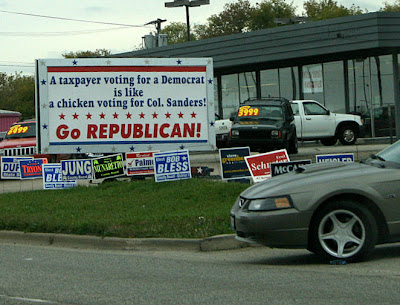 A taxpayer voting for a Democrat
is like
a chicken voting for Col. Sanders!

It’s sitting out in front of the McHenry County Republican Headquarters on Route 14 in the building Pauly Toyota used to occupy.

And, yes, that is a car pulling out of the Republican Headquarters parking lot about 3:45 on Friday afternoon.