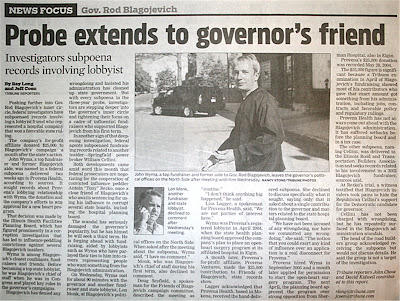 To put it in the words of the U.S. Attorney’s press release on the Tony Rezko indictment:

“Rezko and Levine also were seeking to obtain a kickback of at least $1 million from contractor Jacob Kiferbaum, whose construction company was to build a new facility for Mercy Hospital in Crystal Lake, Illinois, if that facility received approval from the Illinois Health Facilities Planning Board, on which Levine sat.”

In any event, this time the controversy is down the Fox Valley in Elgin and concerns Provena St. Joe’s being granted permission to conduct open heart surgery after hiring John Wyma.

The gist of the Chicago Tribune story by Ray Long and Jeff Coen is that Provena hired Wyma. About a month after having gotten permission to expand its medical service, Provena’s for-profit arm made a $25,000 contribution to Governor Blagojevich’s campaign fund.

Just a coincidence, of course.