That’s what this letter says. (Click to top and bottom halves to get bigger type.) 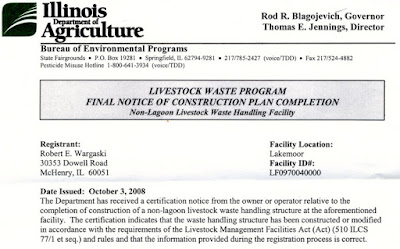 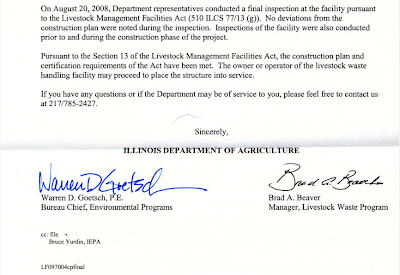 Although the inspection took place on August 20th, the approval letter was not dated until October 3rd.

“The owner or operator of the livestock waste handling facility may proceed to place the structure in service,” the letter says.

And what does pig farmer Bob Wargaski say about his accomplishment?

Yesterday in the mail I received my permit from Illinois Department of Ag. to put my hog confinement facility into operation.

Island Lake has not done any work on the test well across the street from my house since November of 06. The well casing has never been grouted. 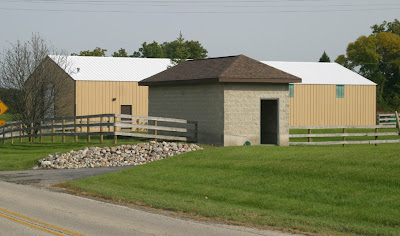 The first counterclaim was dismissed by the judge, as the village did not hold title to the property.

Now the village holds title to the property and the essence of both complaint is that Wargaski is a nuisance and will contaminate the groundwater with his facility.

“The village has no adequate remedy at law based upon the public nuisance which will occur if Wargaski operates a pig farm in his front yard.”

What is interesting to note is

1)That there is no mention that his property has always been agriculturally zoned and he is in complete compliance with Lake County Ordinances with his pig farm.

2) That the village bypassed their engineering firm, Baxter and Woodman’s, recommendations for the best and most economical spot on the Rodewald parcel. That the developer Andy Teegan was not interested in buying the parcel if there was a tower on the property, as it would devalue the homes he wanted to build on what is now Covered Bridge. 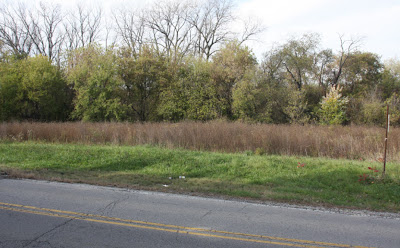 3)That the village took a donation from Andy Teegan to locate the tower in an alternate spot across the road from Covered Bridge as it would be unsightly to his upscale homes. The donation was in the amount of $55,000, that is the cost savings that would have resulted by moving the tower to higher ground from the parcel adjacent to Wargaski.

4)There is an alternate site available on the Walnut Glen parcel as described in the annexation agreement.

5)When Wargaski met with Mayor Tom Hyde three and a half years ago and requested he not build the well and tower on top of Wargaski’s home, Hyde replied,

“Then we are going to do battle.” 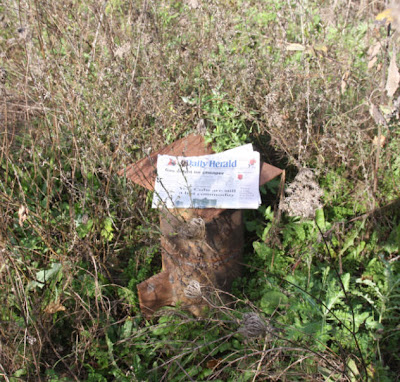 6)If the 600 gallon minute well was to be put into operation it would knock Wargaski’s well out of service by lowering the water table with their high demand. The first of Island Lake’s two proposed wells is less than 300 feet away from Wargaski’s.

All the above information is validated with written proof.

In a second email, Wargaski adds,

“The lawsuit also states the village has spent $270,000 for engineering to date.”

= = = = =
Below the letter is a photograph of the completed pig farm and the property across
the street where the village says there is a well.

Click to enlarge the map and you can see the various well and water tower locations.

At the bottom of the article is all that could be found of Island Lake’s “well.” Pictures supply by Bob Wargaski.