McHenry County Democrats have sent out an imaginative post card based on the game of Monopoly. 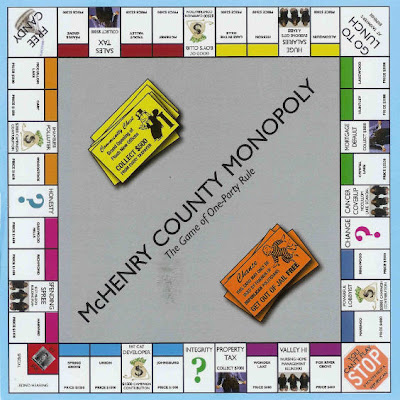 They obviously want people to think that McHenry County Republicans have a monopoly on local office.

While that is not true—think of the Democrats on school boards—the partisan offices at the county level are dominated by Republicans, even though at least one used to be a Democrat.

All of the countywide officials are Republicans and only one of twenty-four county board members is a Democrat (Jim Kennedy of Lake in the Hills in District 5).

This article will address where your town has been placed on the McHenry County Monopoly board.

What town is where Boardwalk is? Who’s Park Place?

I would have thought Boardwalk would have been Bull Valley or Barrington Hills and Park Place one of those two as well. 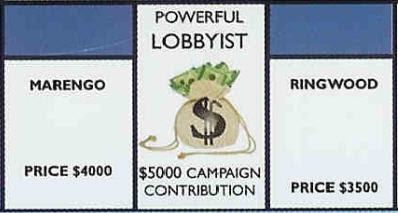 But, that’s not the case.

So, this isn’t exactly a reality game.

Marengo is where Boardwalk usually appears and Ringwood is identified as McHenry County’s Park Place.

Crystal Lake, Huntley and Lakewood are the placed where the next most valuable lots are on the real Monopoly board.

The yellow lots just before where the “Go To Jail” sign on regular Monopoly appears are Algonquin, Hebron and Lake in the Hills.

McHenry, Trout Valley and Prairie Grove are the red lots next to where free parking.

Do you notice a lack of uniformity in what appears to be almost a random placement of village and city names?

The orange ones are labeled McCullom Lake, Cary and Woodstock.

Oakwood Hills, Richmond and Harvard are on the same side next to the jail. 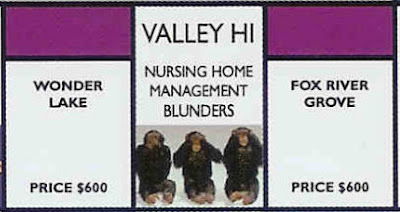 Spring Grove, Union and Johnsburg are right before the jail, but they aren’t the color I remember on the original board (but I’m color blind to some extent, maybe I’m wrong).

The two cheapest properties on the regular Monopoly board were named Wonder Lake and Fox River Grove. I wonder if residents there will take offense.