Culture of Life at the Crossroads

Never before in the history of our nation has the Culture of Life been under such imminent threat of extinction. 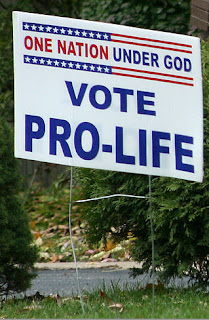 And what is the freedom of Choice Act? It would completely federalize the abortion issue and strike down all state laws from parental notification to the Woman’s Right to Know laws to bans on partial birth abortion to Illinois’ Born Alive bill, declaring them null and void with the stroke of his pen. In effect, the new pro-abortion President would dash our hopes of negating Roe v. Wade through adoption of incremental state laws against certain forms of abortion.

And if that isn’t bad enough, the new pro-abortion President, backed by a cooperative Congress, will appoint as many as four new Supreme Court Judges, undoubtedly with a very liberal bent. This would make it very unlikely that Court action against Roe v. Wade would be successful.

Brother Knights, Pope Benedict XVI, Bishop Doran, Supreme Knight Carl Anderson and our own Pastors have urged us to vote against the Culture of Death. In fact, this is non-negotiable. Please make the correct moral vote next Tuesday.