The Huntley High students came up with two “original” ideas:

That’s the gist of what got published in an editorial of the “The Voice,” the student newspaper that came out last Friday.

And where did the “independent thinking” students get their ideas from?

How about from their teachers who are ticked they weren’t able to pry a 7.4% raise out of the pockets of Huntley school district taxpayers by going on strike ?

Did they officially modify this before deciding to strike?

When did they strike? More than three weeks later on September 15th.

When was the teachers next official pay raise proposal?

On the second night of the strike in the 5.5% pay increase range. 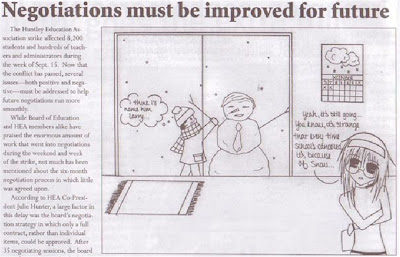 Yet the seniors on the high school newspaper criticize the Board for not being more productive during the prior six months of negotiations. (Click to enlarge.)

Does anyone but me see a disconnect?

Apparently the students on the high school newspaper did not think to ask the teachers,

“Why didn’t you offer to settle for 5.5% before the strike or some time months earlier?”

The teachers didn’t get 5.5%, so it’s not likely they would have given away too much.

No school districts were settling contracts for 7.4% pay raises this year.

That fact would seem relevant to the subject of the Voice editorial.

How could some of Huntley’s these students be manipulated into “thinking” it wasn’t the teachers who decided to strike?

And that somehow the Board made the strike happen?

Were any of the board members contacted or is the Huntley school paper fitting right into the mold shown by the Left Stream media in its presidential election coverage?

Maybe this student editorial will show taxpayers how even bright students can be manipulated.

What can one say when one realizes that the editorial writers couldn’t figure out that 7.4% pay raises would have been financially disastrous for the community, causing another tax increase referendum?

And, even if they didn’t want to admit that on their own, they could have found a board member to say it.

Huntley teachers preach and teach there is an endless pool of unlimited money out there in the real world. 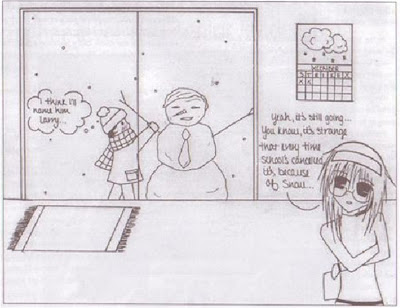 Wouldn’t you think the editorial writers might be a bit puzzled there is never a question on any standardized test about the money fairy?

Poking good fun at board member Larry Snow in a cartoon is pretty imaginative.

Good play on his last name with the girl with almost Precious Moments’ eyes observing,

while the kid outside building a snowman says,

“I think I’ll name him Larry.”

What is missing, of course, is any “Thank you” for holding the line against teacher demands that would have no doubt caused increases in class sizes. 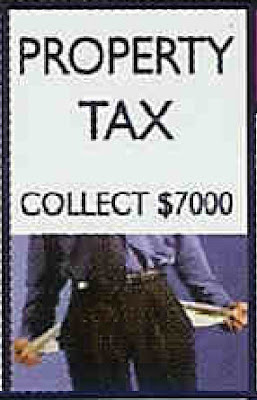 But, high school students haven’t had the pleasure of paying the $7,000 real estate tax bills featured on the McHenry County Democrats McHenry County Monopoly board.

And most of the biggest part of that property tax bill goes to teachers’ salaries.

High school physical education teacher Jennifer Heuck was on the union’s negotiating team. Heuck’s a base salary of more than $67,700? She is also the P.E. department head for her school gets more money for that. Four fifty-minute gym classes a day. That is her student contact time. And she doesn’t have to correct a lot of test papers.

One prominent local retired gym teacher told me when he found out what the job was all about, he asked,

Heuck argued as a negotiating team member that teachers like herself with less than 20 years of experience were entitled to much work less and get paid much higher salaries, in order for it to be “fair.”

Another negotiating team member, Jane Kantor, is a K-2 librarian with a base salary of more than $71,600, Kantor doesn’t grade any papers either. Both have this in common: They both have less than 20 years of teaching experience.

It is interesting to observe what values the Huntley teachers are passing on to the skilled students on the high school newspaper. Sad, but interesting.

Heuck’s base salary of more than $67,700 for “teaching” a maximum of four gym classes a day, should be the symbolic statement of how much teachers union leaders like Heuck have abused property taxpayers in these here parts. All the while whining publicly how underpaid she is.

With less than 20 years’ experience, you can be in your early forties and make this much money doing this much work. Some might still consider the salary less than deserved, but others might disagree.

How many other school districts around here are quietly paying their P.E. teachers with less than 20 years experience, more than $67,700 for a maximum of four gym classes a day? Maybe Heuck and the Huntley teachers did us a favor for bringing this to everyone’s attention.

The previous board put contract provisions in place that gave Heuck the right to teach fewer classes each day.

Snow was the only board member who voted against that contract.

Once in, it takes a lot of effort to get something like this taken out. It’s still in the contract.

You would not be surprised that the union’s negotiating team protected their own self-interests.