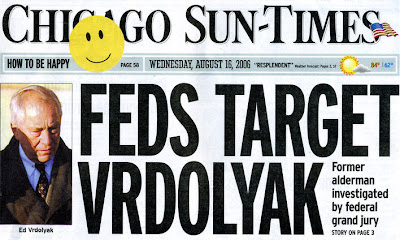 Fast Eddie has slowed down.

He’s in his seventies and, like other older pols who have admitted to violating federal law, his run is over.

The Chicago Tribune is reporting that Judge Milton Shadur has told jurors that Ed Vrdolyak will plead guilty. Here is his plea agreement.

As former State Rep. Harry Leinenweber told me on the House floor when we were discussing Vrdolyak one day he was in the news, probably because of his Chicago City Council floor leadership of the opposition to Mayor Harold Washington,

Eddie was the only University of Chicago Law School classmate who successfully defended himself on a murder charge while a student.

8-16-6 Anyone Know Any Vrdolyak Stories?

5-16-7 Tribune Quotes from Vrdolyak Article, Too