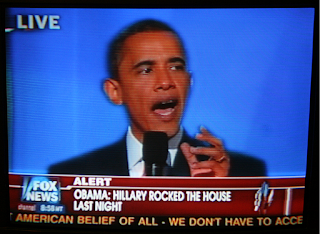 Without early voting totals folded into the results, Barack Obama was leading John McCain by one percentage point.

House Speaker Mike Madigan will have some explaining to do for his refusal to reinstate the straight party voting that Republican House Speaker Lee Daniels killed the ability to punch one hole and vote for every on the ticket.

Had straight party voting been in effect, there might have been more victories down the ticket.

As it stands now—with the Democratic Party-dominated early voting included in the totals—Democrats have picked up two county board seats.

Both men were strongly supported by Pro-Life forces in McHenry County.

But Kaempfe could not convert that seeming advantage to victory. Instead the spread was almost 23 percentage points.

Democratic Party candidate for coroner, the only countywide Democrat who actually had his name on the ballot, also got more Democratic Party primary votes than incumbent Republican Marlene Lantz.

That did not convert to a close fall race.

I am sure local Democrats will wonder what would have happened had there been straight party voting.

55% is considered a landslide.

Running best was McHenry County State’s Attorney Lou Bianchi. He almost got 62% of the vote in his re-election campaign. The possibility that the hotly contested primary election with Dan Regna would hurt his re-election chances against former Democratic Party Chair Tom Cynor did not materialize.