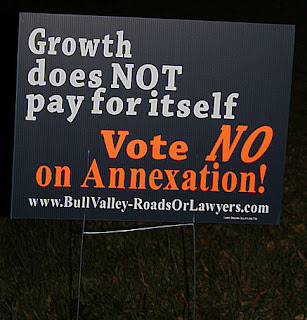 The little referendum I worked on, the Bull Valley Annexation referendum, went down big time. Those who think the village should forcibly annex property got over 80% of the vote.

Proponents made the pitch that voting “Yes” would result in “open spaces.”

It takes 11 signatures to run for Bull Valley village trustee, but I’d suggest getting 20, if you want to run. The ruling establishment loves lawyers and might well try to know unfriendly candidates off the ballot. (They also steal signs.)

Only time will tell if the village will continue losing court cases.

My non-lawyer prediction is that the board will.

I can safely predict that the village board will continue spending more money on attorney’s fees than it spends on repaving its roads…and its roads will get still worse. Under $1,000 of pothole filling each year won’t repave any roads.

As the ministers say during their stewardship sermons, where you spend your money tells what your priorities are.

The Huntley Library tax issue went down almost 60% to 40%.

The McHenry Library referendum similarly was dissed by the voters.

The Cary Park Board won the right to sell 80 acres to raise money for a community center next to Cary-Grove High School.

In Algonquin-Lake in the Hills, voters approved having more elected officials on the fire protection district board. The practical effect is to allow district trustees to talk among themselves before meetings.