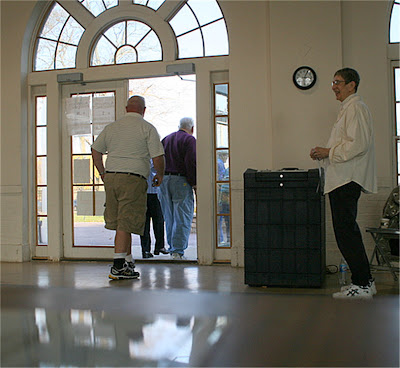 Voting was allowed at the Main Beach House’s main room yesterday for the first time in a very long time.

The polling places for two precincts were relegated to a small back room, ostensibly because all those voters scuffed up the hard wood floor.

I suspect the real reason was because a karate class met on election days and the Crystal Lake Park
District didn’t want to lose the revenue.

Am I being too cynical?

Consider that the park board approved renting the middle of Ken Bird Park to T-Mobile for a cellular phone tower for $2,000 a month. 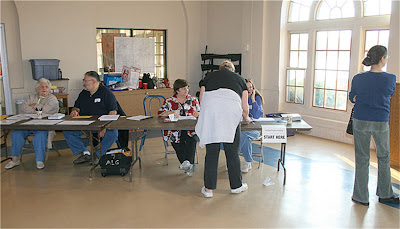 Imagine my surprise to find the hard wood floor had been covered with some vinyl product.

It boggles my mind why the park board would not like to showcase this most beautiful indoor venue it owns as a polling place for every election. All the judges who had served in the little back room want to return here permanently.

But, back to my main story.

Michael A. Bailey, who lives on Cumberland Lane, came in to vote in mid-afternoon.

He was told he had already voted.

He said he hadn’t.

So, I called the McHenry County Clerk’s office and finally got transferred to the an authority figure.

After checking the records, she said Bailey had voted in Lake in the Hills on October 18th.

Bailey checked his calendar, saw it was a Saturday and remembered taking his daughter somewhere, but not voting. 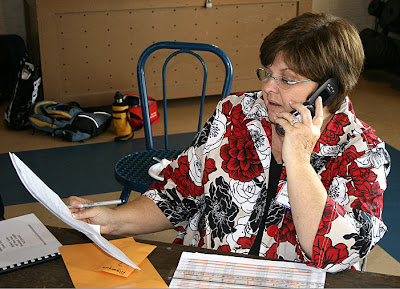 But, it turns out, the judges stationed at Lake in the Hills just identified the wrong Michael Bailey as having voted. They picked the first one on the list. They shouldn’t have.

She said Bailey would be allowed to cast a provisional vote. I handed the phone to election judge Colleen Walters. 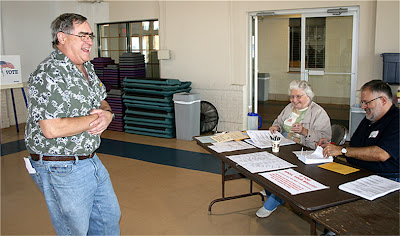 Then, I heard Walters make a most persuasive argument that Bailey should be allowed to cast a regular ballot. She related how Bailey was a long-time resident and shouldn’t be penalized by a mistake of Lake in the Hills election judges.

Walters got permission to give Bailey a regular ballot.

That tickled him. Or maybe this picture of his laughing was our discussion of how ridiculous the situation was. 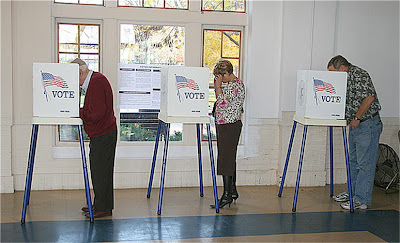 Later, after I had taken my son’s friend—the two spent the afternoon playing at the park—home, I saw a TV news story in which Cook County Clerk David Orr was explaining exactly the same situation in his suburban Cook County jurisdiction.

There was one big difference.

The inconvenienced suburban Cook County voter was forced to settle for a provisional ballot.