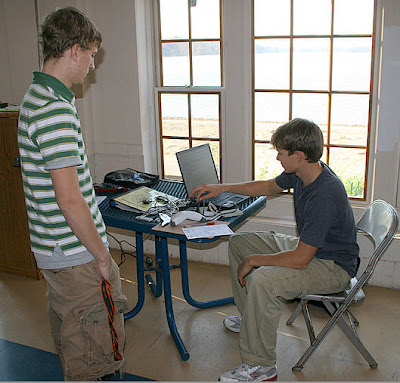 For the first time Algonquin Township Precinct 7 had a high school election judge.

His name was Caleb Johansen, and, wouldn’t you know it, he was assigned the electronic voting task for both Algonquin 7 and Algonquin 19.

It was a task the older judges were happy to have him assume.

My son and a playmate had spent the afternoon playing in the lakefront park.

Then the dreaded phone call came from my son’s friend’s father. 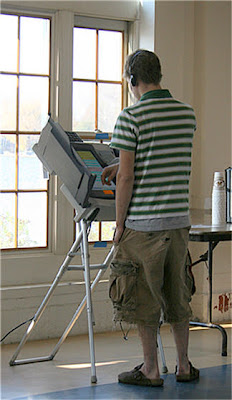 By the time I left a little after 4:30, only about 18 people had been brave enough to vote electronically.

Even most of the young first time voters preferred paper.

Maybe it reminded them of the familiar multiple choice tests in school.

One was Sean Gorey, seen on top talking to Johansen and to the right casting his electronic votes.

Later Gorey played the role of Good Samaritan, bringing a friend on crutches to vote.

Johansen, by the way, is home schooled.