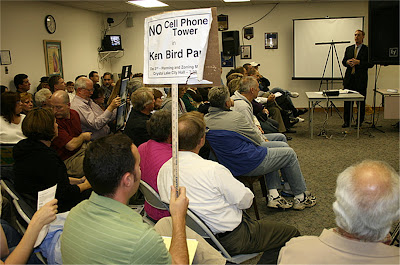 Having served in public office for 20 years, I can attest that there is an invisible line between an elected official and his or her electorate.

The problem is that the public official does not know where that line is.

Approving a cellular phone tower for T-Mobile with room for a second company to piggy-back another set of aerials, was an invisible line between the Crystal Lake Park Board and neighbors of Ken Bird Park that breached the invisible line.

“I screwed up,” was the way Commissioner Mike Walkup put it.

Most of the board seems to understand that, even if some still thought they had made the correct decision made the audience aware of that by defending the decision. 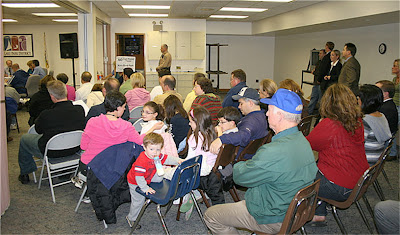 But knowing they had at minimum made the mistake of not letting the Ken Bird Park neighborhood know what might happen ahead of T-Mobile contract signing time was the reason the park board delayed the Crystal Lake zoning hearing for a month.

They figured they better give the outraged citizenry a chance to vent.

And, vent they did.

There weren’t quite as many people in the board room as there had been for the Gay Games request to usurp Crystal Lake on one of the best summer weekend days, but it was the second-biggest crowd I have seen.

I’ll try to get to the details this weekend.

Let me give my impressions today. 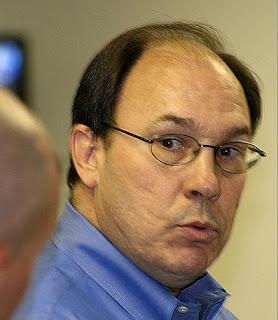 The Illinois corporate lobbyist Mark Wilson attended and spoke to the gathered throng.

Before you ask, he was safe.

No one brought pitchforks or torches. 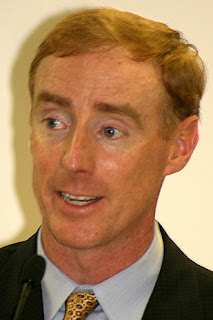 But they did bring T-Mobile web site sales material that said Crystal Lake had no reception problem.

Hired guy Mike Howley couldn’t respond adequately to that seeming contradiction to the avowed need that led to T-Mobile’s approaching the park board in the first place to build the half million dollar tower.

The neighbors are intensely opposed to the visual pollution of their park. 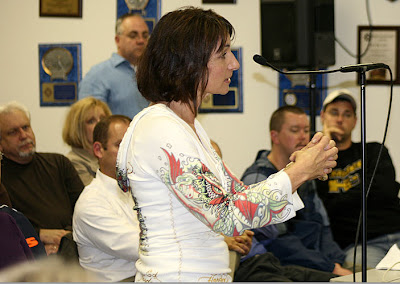 As Lisa Ryan put it,

“(I cannot understand) how having a cell tower, that kind of a grotesque structure in a very small park is really not in the best interest of the park district community.”

This is the kind of woman that park board members up for re-election better hope doesn’t decide to run against them.

And testimony from two women about the health hazards (and by that they meant deaths) in the family and among friends who lived near cell towers and high tension electric wires was so intense and emotional that it could not help but counter the “no health problem” testimony of Ph.D. Jerry Bushberg whom T-Mobile brought in. 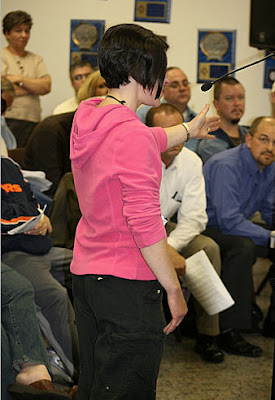 Shelly Lentine, who brought her five children to the meeting radiated sincerity when she told of her uncle and cousin having died of cancer and another cousin suffering from cancer.

The closest homes to the proposed cell tower are 181 feet away.

“This doesn’t affect any of you.

“Can you guarantee that this won’t cause (my children) cancer?”

Shelly Davidson, a two time cancer survivor, spoke of growing up in a neighborhood with high power lines and she listed her area friends and the ages they died of cancer. She pointed to a study that said there was a connection. 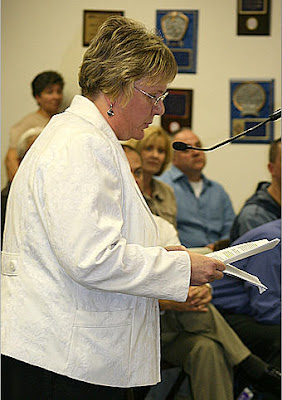 “It took 30 years. Those concerns were brought up early and people said, ‘I don’t think so.’

Looking at the park commissioners, she said,

“(This is) what I want you to think about:

“Is the health of our children for sale?

“I don’t want any of those (Ken Bird Park neighborhood) kids to come back some day and say, ‘Who signed that contract?’”

So, having stepped over the invisible line and firmly gripped the T-Mobile tar baby, what can the park board do to cleanse itself.

The board has signed a contract on behalf of the taxpayers of the park district.

There are potential penalties if the park board breaks the contract.

That was made clear.

So, about all the park board members can do is hope that the Crystal Lake Planning and Zoning Commission has enough solvent to let them slip away from the tar baby. 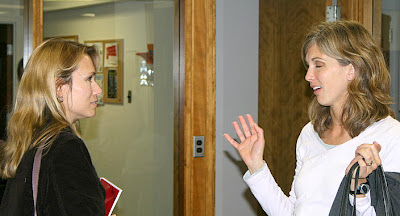 One of the commissioners, Carolyn Schofield, attended most of the meeting and stayed until the end. She ran for city council two years ago, so that puts another element into play.

People can pass petitions for local governments like park board, city council, school board and township office right now.

What if the Crystal Lake Planning and Zoning folks approve the special use permit being jointly requested by the park district and T-Mobile, but Schofield votes, “No?” 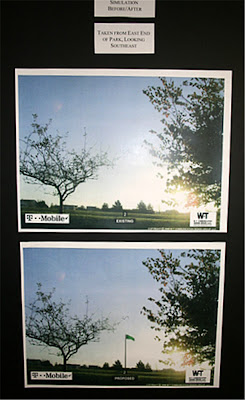 She and any other reasonable person could argue that this type of skyline pollution is not appropriate for a city park. A candidate could win just by doing the right thing, which is all several members of the neighborhood asked park board members to do.

What if she runs for city council again? Three such commissioners ran two years ago and one was elected.

That means the three city council incumbents, if they are running for re-election, would create a ready-made issue should they vote in favor of T-Mobile.

A planning and zoning commissioner in opposition to T-Mobile and a candidate for city council could mobilize enough door-to-door campaigners to oppose anyone who voted in favor of the special use permit to cover Crystal Lake. I base that conclusion on the way non-Crystal Lake residents northwest of Crystal Lake mobilized to support Crystal Lake city council candidates who pledged not to zone a gravel pit near their subdivision.

And, should candidates pop up to oppose incumbent park board members up for re-election, those who have allies on the planning and zoning board and/or the city council could secretly encourage their political allies to get rid of the T-Mobile tar baby in order to make their re-election or election campaigns less of a trial.

= = = = =
Photos are put next to the people’s names in the story. The only relative close-up with an unidentified person is the woman to the left in the bottom photo. The woman to the right whom I caught blinking her eyes is Crystal Lake Planning and Zoning Commissioner Carolyn Schofield.