It wasn’t enough that huge fees were imposed on Illinois trucking companies in the Democratic Fee Fest during Governor Rod Blagojevich’s first year in office.

It wasn’t enough that Governor Rod Blagojevich’s Toll Tax Thieves decided to finance the rebuilding of the Tollway, including the drive-through lanes.

Now, the governor’s Toll Tax Thieves have set their sights on extracting more money from the trucking industry.

Of course, the car driving public won’t connect the increase in the price of everything delivered by truck to the fee hikes of Blagojevich’s Toll Tax Thieves.

A hearing will be held 2-4 PM Thursday at the Huntley Park District Recreation Center, 12,015 Mill Street.

Here’s what the Tollway says about the Toll Tax Hikes:

The $1.8 billion plan would be financed by bonds backed by a modest toll increase for commercial vehicles, and variable tolls rates to be established for single-occupant passenger vehicles using the Green Lanes. The Illinois Tollway has not increased tolls for passenger vehicles using I-PASS in more than 25 years and has one of the lowest toll rate per mile in the nation. The Tollway is a user-fee system and does not receive any state or federal gas taxes, only those who use the Tollway pay for it. 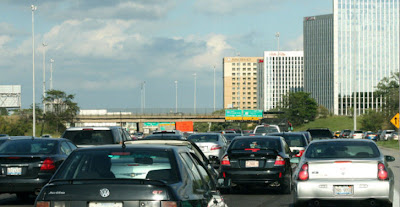 As part of the funding plan for phase two, commercial vehicles will see a rate increase in 2015. Beginning in 2016 commercial rates will be tied to the CPI. The Illinois Tollway will work with regional transportation and transit experts as well as review best practices from managed lanes nationwide and develop a program that will allow transit vehicles and car pool drivers to pay current I-PASS rates and will create a variable rate fee structure for the new Green Lanes. 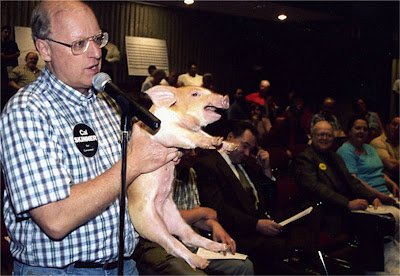 I would point out, as I did in 2002 when I was running for Governor on the Libertarian Party ticket, that the tollway receives no federal assistance because the powers that be–whether they be members of the Democratic or Republican Party–drain the money that comes from the federal government because of the tollway’s miles of interstates to subsidize highways elsewhere in Illinois.

The same goes for the Motor Fuel Tax paid by tollway users. Any rational person would say that this MFT should go to subsidize the tollway’s operation or to lower tolls.

But, not in Illinois.

= = = = =
The picture at the bottom is of me and my little piggy in Waukegan in 2002 pleading with Governor George Ryan’s Toll Tax Thieves not to let her grow up to be a Toll Tax Hog.