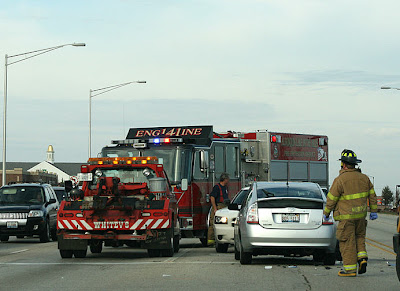 The passage of the McHenry County Board asking the Illinois Commerce Commission to allow it out from under the ICC jurisdiction it requested earlier in the year was approved on November 13th.

February 19th the McHenry County Board resolved it wanted to be under the Relocation law passed by State Rep. Jack Franks (D-Marengo) and State Senator Pam Althoff (R-McHenry).

A towing industry effort to educate county board members about what the new law required led to repeal on October 14th, one day before ICC control would have taken effect.

The State’s Attorney’s Office confirmed Hunt’s interpretation of the law.

Senator Althoff told the board that she and Rep. Franks would attempt to amend the law to allow the county board to accomplish its goals.

= = = = =
The accident you see was on Randall Road in Algonquin near Meyer’s gas pumps on November 13th.