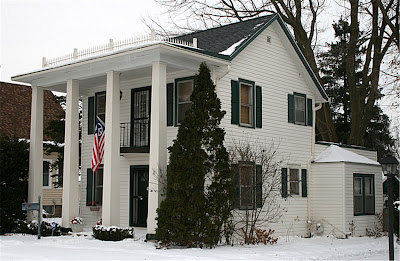 I haven’t lived in Woodstock since 1983, so I don’t pretend to know the lay of the political landscape.

Even so, I was surprised to learn that Mayor Brian Sager, who is running for re-election, has drawn an opponent.

Sager, you may remember, since at least June, seems to have been positioning himself to run as a Republican for state representative if State Rep. Jack Franks (D-Marengo) decides to run for a statewide office in 2010.

Filing against Sager is Mark Indyke of 930 Clay Street north of the Square a couple of blocks. (You can see his home at the top of the article.)

I knocked on Indyke’s door and I guess I am not surprised that all I heard was a couple of dogs barking at me. 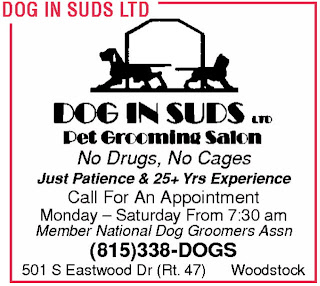 It especially made sense when I found he and his wife Leslie-Anne Walker-Indyke own Dog in Suds on Route 47.

A Google search shows him to be in charge of the Community Service portfolio for the Woodstock Rotary Club which meets in the morning. (I was a charter member of the noon club when I was McHenry County Treasurer.) Plus he seems to be or have been a member of the Lake Geneva Yacht Club.

Indyke shows up in the Woodstock City Council minutes asking for reinstatement of the community gardens at Emricson Park.

I sent Indyke an email asking why he was running. No reply by the time I finished this article. I also called his business at 815-338-3647 (815-338-DOGS), but he had already gone home. When I receive a reply, I’ll be happy to give you more information.

In addition to Sager and Indyke, the only other person to file was city council candidate Michael Turner.