Two of the investors in the Waukegan casino group showed up in Crystal Lake to make a pitch for and won the approximately $115 million Vulcan Lakes Tax Increment Financing district development. 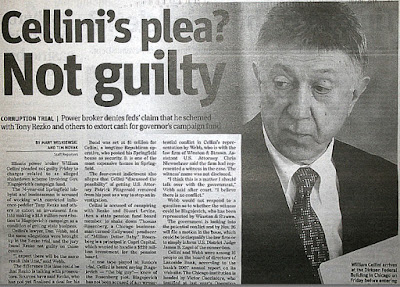 One of them, sitting before the Crystal Lake City Council was Bill Cellini. He is reported to have sold his share in the Waukegan enterprise a year and half ago.

Cellini is known by Gaming Board Chairman and former State Rep. Aaron Jaffe from Jaffe’s time in the General Assembly.

That left Richard Stein, another guy sitting at the table with Cellini.

The Chicago Tribune reported Cellini and

“…others with Blagojevich ties have connections to the businessman he sold it to: Michael Pizzuto, a Hinsdale real estate developer who was once director of finance for Cellini’s New Frontier Development.

“Cellini was indicted this year on charges that he extorted campaign contributions to Blagojevich from a Hollywood producer whose investment firm was seeking state business.

“Blagojevich appointed Pizzuto to the State Universities Retirement System in 2004, and a “clout list” released in the trial of convicted (Rod) Blagojevich fundraiser Antoin “Tony” Rezko suggested that he was sponsored by fellow fundraiser Chris Kelly.”

Board members also pointed to the $1,000 apiece that Pizzuto and Stein donated to Waukegan Mayor Richard Hyde as a negative.

He personally withdrew from the project. Subsequently, the rest of the consortium dropped out.

“The question that remains unanswered is how a Springfield-based Republican developer in business with a Democratic Party developer described by Kass as Mayor ‘Daley’s favorite’ found out about this Crystal Lake TIF opportunity, let alone captured it from local developer Bo Strom of Charles River Development.“

Just in case you haven’t seen the YouTube postings of Crystal Lake Mayor Aaron Shepley questioning Cellini, you can link to them below, first the very short version, then the longer on that puts the shorter one in context.

Here’s the one that puts the short one into context, which follows.

= = = = =
In the blurry photo in the middle of the story, you can see a broadly smiling Bill Cellini leaving the Crystal Lake City Council meeting after winning the rights to develop Vulcan Lakes using TIF subsidy money. Behind him Richard Stein can be seen scratching his head.