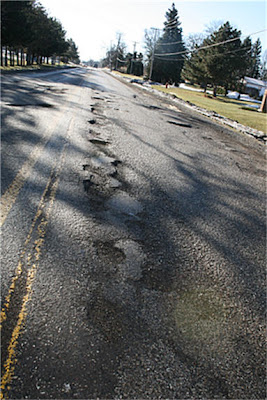 This road, that is.

Some call it Walkup Avenue, others the McHenry Blacktop.

McHenry folks may call it the Crystal Lake Blacktop.

And, yesterday, I heard it called Walkup Road.

Whatever one calls it, this portion of the road is rivaling the worst road in the Village of Bull Valley.

Bull Valley is noted for its b-b-umpy roads.

The photo on top shows a hurriedly shot picture taken in the middle of the McHenry Blacktop in front of the Mormon Church.

Traffic was a bit too heavy to be doing something like this in the middle of the road. 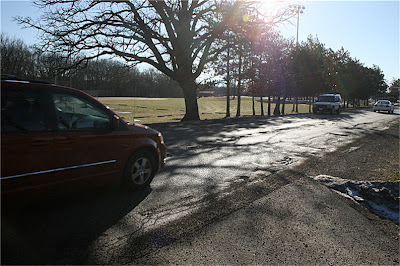 Going out of town at the end of Veterans Acres, people are traveling slow enough to try to dodge the potholes. 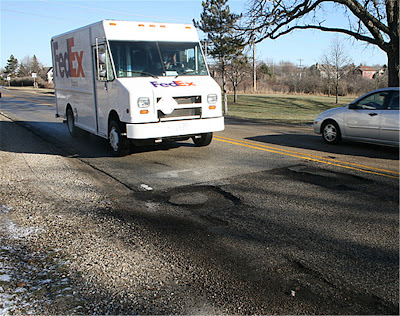 Coming into Crystal Lake, if drivers don’t know of the bumps in the road, they just plunge off the good part of the highway that is good into two potholes.

There is not problem hearing when their wheels bottom out.

“We have two crews out and Walkup is on their schedule,” he told me. (We always have one crew out,” he added later.)

I asked about when that small part of Walkup would be repaved.

“There’s a project for Walkup Road, the whole road, for widening and turn signals and turn lanes, but they may stage it,” DeVries told me. He’s not really the one to ask about such matters.

Yesterday McHenry County Highway crews were repairing Bay Road, Main Street west going out of town, “right down by the bridge,” besides the McHenry Blacktop near in front of the Crystal Lake LDS Church.

I asked DeVries how he learned about problems on county boards and was surprised to learn that members of the public rarely call. The snowplow guys (of whom I am a fan) turn identify many.