At the Monday-before-last meeting of the McHenry County College’s Committee of the Whole, a sheet of paper was passed out with the names of people MCC President Walt Packard suggested be approached to serve on the euphemistically titled “Engagement Facilitating Team.”

It was one of a number of suggestions made by tax hike specialists Unicom-ARC out of St. Louis. Here is what the MCC board hired the firm to do.

The “Engagement Facilitating Team” is a group whose real purpose is to prepare the way for a college district tax hike referendum.

Here is what President Walt Packard handed out to board members: 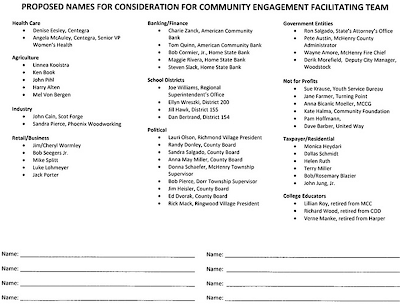 I certainly don’t know all of these folks, but none of the names pops off the page as ever having actively opposed a tax hike proposal at a referendum.

Tomorrow – Additions to the “power elite” list by MCC board members.

= = = = =
The McHenry County Board members shown in the small head shots are, from left to right, Sandra Salgado, Anna May Miller, Jim Heisler and Ed Dvorak. McHenry County’s Administrator Pete Austin is just below. At the bottom is former District 47 School Superintendent and former Crystal Lake Chamber of Commerce Executive Bob Blazier.